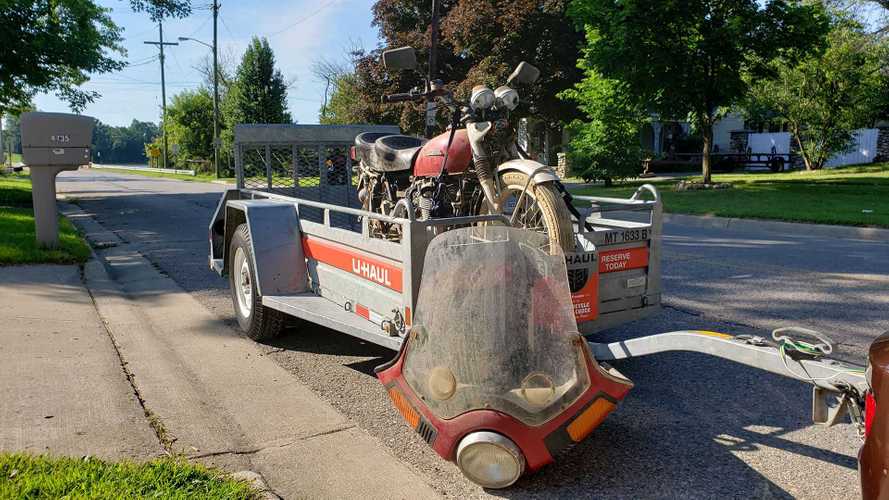 Hubris, madness, or both?

Okay, I'm gonna level with you guys here. I may have a problem. In my ongoing crusade to rescue, rehabilitate, and rehome every abandoned Japanese motorcycle in the world, I spend more and more time (and money) perusing Facebook Marketplace and Craigslist than I probably should. My specialty, if you want to call it that, is sub-$1000 bikes that "don't run", and there are a surprising number of them out there. This problem is how I ended up driving all the way to the ass-end of nowhere in rural Michigan last week with a trailer and a blank check to pick up SBR's latest rescue—an extremely ratty, rusty 1975 Honda CB550.

Pride Goeth Before The Fall:

For those of you not familiar, the CB550 was a mid-sized standard released by Honda back in late 1973 as a '74 model. Developed from the CB500—a bike designed as a mid-sized alternative to the "big" CB750—it was powered by a 544cc, single overhead cam, air-cooled, inline-four that put down a relatively respectable 40-ish horsepower. It had a five-speed trans, a single-disc brake forward with a common Honda drum aft, a four-pack of fiddly 22mm Keihin carburetors, and weighed in just shy of 450 pounds soaking wet.

Throughout its short run—1974 to 1978—the 550 was sold in two trim levels: the standard 550K and the sportier (for various metrics of "sporty") 550F Super Sport. Both bikes shared the same engine, frame, running gear, instruments, etc, but the F models sported a 4-into-1 exhaust, flatter handlebars, and single-color paint jobs with no chrome accents. They were pretty popular during their time but were ultimately superseded by the all-new CB650 in 1979.

My 550 is a '75 K-model and I gave a cool $500 for it. As you can clearly see, it is a total goddamned disaster. It originally came from Japan in Candy Jade Green (Honda's best color of that era) and black two-tone with a gold accent stripe. Along the way, some absolute monster painted it basic, non-Honda red and kitted it out for touring with a Vetter Windjammer IV, S&W air shocks, an oil cooler, a 70s-tastic king/queen touring saddle, and a Martek 440 electronic ignition. Someone, probably the touring owner, also relocated the kickstand forward so it's mounted right under the downtube.

All of that crap is easily dealt with, though. The real problem here, aside from the missing pipes, is just how rusty this poor thing is. When I picked it up it was covered in decades of dust and the wheels and lower frame were caked with dried mud. A quick scrub once I got it home revealed a possible reason for the mud and for the bike's long dormancy—a serious scuff on the stator cover and other damage suggesting that the PO had a bit of a get off at some point. The cursory bath also uncovered roughly nine square miles of rust. None of it is serious—the worst of it is some ugly surface rust on the swingarm—but it's everywhere and it dictates what happens next.

STICK TO THE PLAN!

This isn't going to be an easy fix and flip like the Buell or even the CB200. My plan as it stands now is to strip the bike completely down, sand and paint the frame and swingarm, refresh the engine while it's out of the frame, and build it back up with swap meet parts (seat, turn signals, side covers, airbox, etc.) and the help of Common Motor and 4-into-1. Once it's reassembled, I'll paint the sheet metal Flake Sunshine Orange (a color available on the '75 CB550F), fit an aftermarket 4-into-1 exhaust, and sell it to buy more rescue bikes and parts for Project FireBolt.

It cleaned up well enough, but there's a lot to do.

That's the plan, anyway. As we all know, every plan is a great plan until first contact so anything could happen. Hell, I'm already thinking about selling the CB450 and keeping this thing because I can't make up my mind. Whatever happens, stay tuned. There's sure to be a whole lot of wrenching, complaining, and cussing of Soichiro Honda going on for your entertainment.