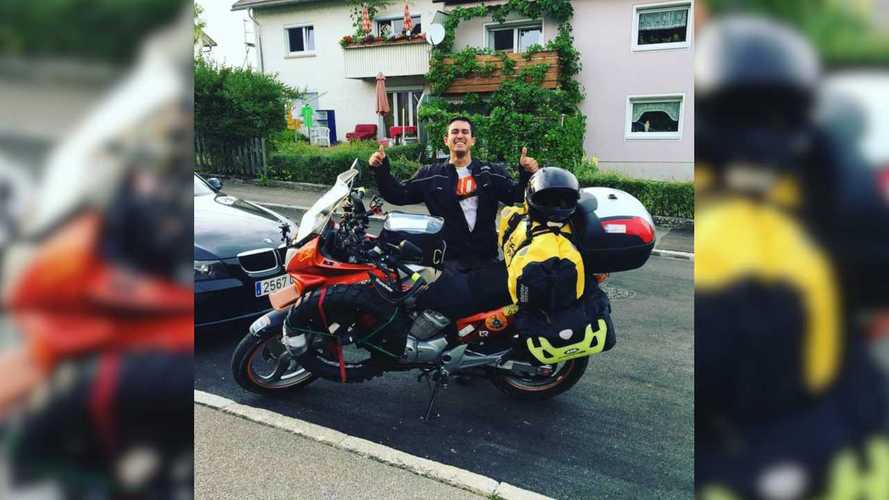 When choosing a 125cc bike to tour from northern Spain to Mongolia, what would you choose? If you’re Pedro Esteban, your choice would be a 2005 Honda XL125V Varadero—the carbureted version, please, because it’s easier to fix if something goes wrong. With all his gear and himself on board, he estimates total weight to be around 270 kg (or 595 pounds). His planned route will take him across 15 countries in 45 days, as long as everything goes to plan.

Esteban is actually doing a longer route than the Rally, since he started in Burgos, Spain. The official event starts in a top-secret location in the Czech Republic, about 30 miles west of Prague. It officially ends in Ulan Ude, Siberia. The event launches July 22, and the finish line opens August 14 and closes September 16.

Apparently, in the past, some jerks decided to just dump their vehicles after finishing the rally instead of schlepping them back home. Understandably, locals were not amused. The Adventurists now insists that you make arrangements to ship your vehicle home at the end, and have arranged discounts with local freight companies to aid in accomplishing that task.

Have you ever considered doing the Mongol Rally? For those unfamiliar, it isn’t a race. The event is run by the Adventurists, and their catchphrase for it is “Motoring Stupidity On A Global Scale.” Motorcycles participating must be 125cc or less, and cars participating must be 1 liter or less. It is possible to have slightly larger-displacement machines if you’re willing to pay a penalty, but the absolute largest bike you can have is a 250cc, and the absolute largest car you can have is a 1.2 liter.

Also, there’s no official route. Instead, you must chart out your own route for yourself—as long as it gets you to their established finish line somehow, some way. If you need visas for countries you’re passing through, you’ll need to arrange those in advance.

The point of the Mongol Rally is adventure—finding your own way into and out of various situations, and hopefully having a great time along the way. Like other Adventurists events, it also supports the NGO Cool Earth, which works directly with local communities on the ground to fight the effects of climate change and deforestation. Participants can also raise additional money for the NGO of their choice, so Esteban is also raising money for the One Acre Fund, which works to eradicate rural poverty in Africa. He has a GoFundMe set up for donations if you’d like to support his mission.

It’s an impressive task, but he’s also documenting everything along the way, as much as he possibly can. You can follow his journey here, on his Instagram, on his Spot page, on his Facebook. If you do, stop by and cheer him on, because this sounds EPIC.