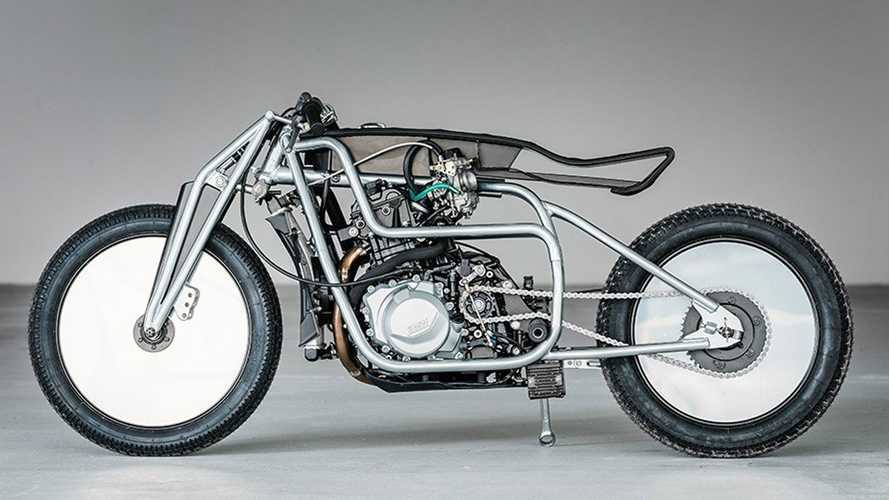 Calling it Bauhaus doesn't make it so.

Like a lot of you out there, we love a good custom build. The reimagined lines, the beauty of a machine brought out from under its stock form, no longer dictated by manufacturers’ bean-counters but by the imagination of craftsmen in a small workshop.

This is not one of those builds. Wander over to this contraption out of the KrautMotors garage.

Look, I know right off the bat someone’s going to stop in just to say “well, could you do better?” And while I’ve never tried, I’m starting to think I could. Usually, we share custom builds that are amazingly good. This one, however, is not, and has left me baffled.

From far off, this motorcycle design looks like pure art, and not really rideable. The closer you get, the more you realize that the busy stuff in the middle is in fact a fuctional BMW F850 engine, and the pipes surrounding it a functional frame.

Then, you get even closer, and you realize that some of those pipes are supporting a flat, barely-upholstered seat that’s more suited to a dentist office’s waiting room. And the more you look at the welds on that ersatz gas tank, the more you’re not sure the bike would actually hold up to being ridden, or, you know, not leak. Anyone who knows anything about welding will tell you those welds are super goobery. I mean, maybe nobody else really notices or appreciates when a bead is really artfully laid down on a piece of metal, but I sure do. I’ve seen pieces of motorcycles that are welded fancier than cake decorations, and that is the sort of thing I consider good art. I love metal as art.

This bike is art, but it is not good art. It is at best a six-footer, and the design choices are interesting, I will give it that. But the execution leaves quite a lot to be desired.

Can we talk about girder front ends for a minute? I know that traditional forks aren’t pretty, and when you get into form over function perhaps they don’t deliver your specific aesthetic. But if a bike is going to be ridden, and that is what motorcycles are for, ultimately, then form should follow function. Why make an art bike that is miserable to ride? Do the best custom-built motorcycles not bring out the best in form and function?

Can we also talk about the way the drive chain routes and rolls over the… footpeg? And the complete lack of front brake but the tabs for one, on one side? Also I know there are still some hard-tail enthusiasts out there, but no rear suspension at all, combined with a girder front end, is going to make this bike a real challenge to ride. If, after all, it was not built to ride, then why build a motorcycle?

I urge you to go look at the rest of the pictures at DesignBoom; the machine is a sight.