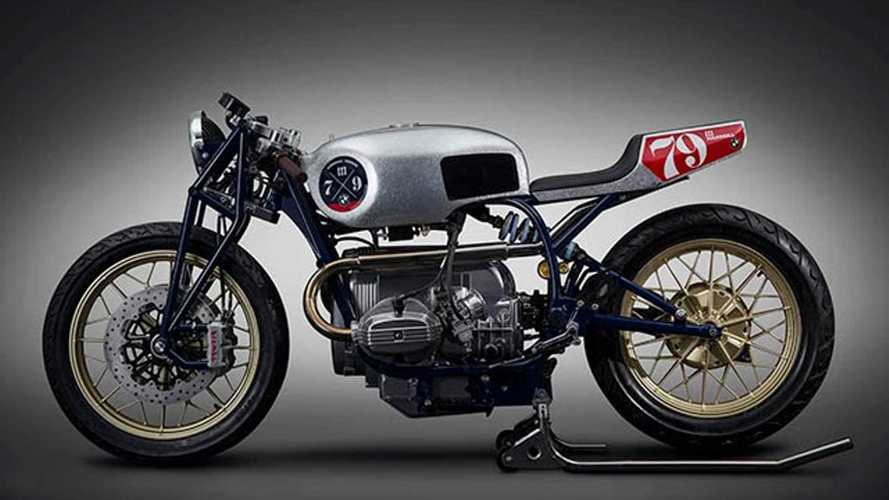 Stodgy? Not this thing!

Have any of you out there ever ridden an old BMW airhead? Maybe a not-so-old airhead, since they made them right up until the early 90s? If so. you know that, if you are used to a modern machine, the bikes can be a bit stodgy and difficult to pilot.

Well, Beijing’s Mandrill Garage may have solved most of the problems those bikes had when they originally rolled off the assembly line. The 800cc motor was a bit of a wheezer even in its day, but they are among the most robust motorcycle engines ever built.

This build proved a real challenge, though. BMWs were never popular in China, and weren’t imported all that much. The specific year of the donor bike for this project (1981) was never imported at all. Since they weren’t popular, parts are thin on the ground. The good news for the custom shop, though, was that the customer gave them absolutely free reign to do whatever they wanted with this build. Start with an R80, then, I guess, follow your heart?

And they did! Look at that thing!

The only bits original to the bike are the wheels, the engine and the frame. Everything else was sourced from a non-BMW or hand-built. The beefy Brembos alone are a serious improvement over the too-weak stock brakes.

Thanks to Pipeburn we have some spectacular photos of the finished product, resplendent in loads of metal flake and classic BMW “M” racing stripes. Those snowflake wheels, powdercoated in a soft gold, stand out against the blue frame. The engine has been rebuilt and shined up, and the transmission reportedly “polished.” I hope that means on the inside, since those gearboxes were notoriously clunky. Giving all the internals a good shine would make it snick through the gears so much easier. Maybe the eventual rider won’t even need to preload the shifter!

The original carburetors have been replaced with Keihins and the airbox is now a pair of custom-machined velocity stacks. The stodgy old exhaust pipes the bike was born with are no more! It sports instead a full custom system, one full pipe per cylinder. They curl up to make that 180-degree bend and route very subtly up and under the tail.

All in all, what a beauty of a build. Roll on over to the Pipeburn page for more photos.