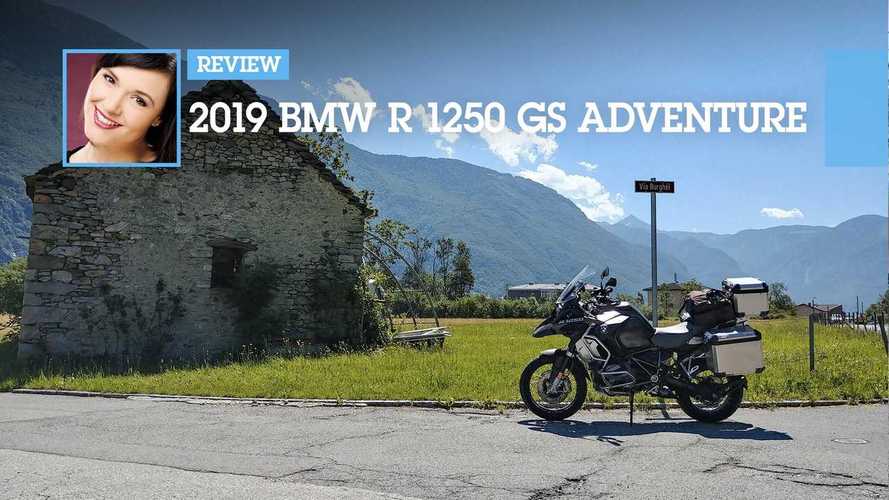 For most of its run on the market, the BMW R 1200 GS was one of the best-selling motorcycles in Europe. It was also BMW's most popular model in the American market. The history of the R flagship is rich, from the inception of the R 80 GS in the 80s right up to the new 1250; a timeline that unfolded 50cc at the time. Such a family tree deserves a model that will do the legacy justice. Has BMW achieved that with the new R 1250 GS? Mainly yes, a little bit no. Before you start throwing rocks at me, hear me out.

For 2019, BMW introduced an entirely new adventure flagship model to its lineup. The descendant of a long line of Dakar winners and capable adventurers, the new R 1250 GS has big wheels to fill. To help the new bike do this, BMW fitted it with an entirely new Boxer engine and a flight of new standard accessories and technologies. All those shiny toys come at a price, however: extra weight.

A few weeks ago, I headed over to Europe for a two-week touring extravaganza. On the itinerary were pit stops in Austria, Italy, Switzerland, France, and Germany. For the occasion, I reached out to BMW and the company kindly hooked me up with a new 2019 R 1250 GS. From narrow medieval village streets, to winding mountain passes, to open, limit-free highways—I got to experience what the new GS has to offer. Truth be told, the answer to that is “a lot”.

I should note that the only context in which I didn’t test the GS was off-road. Not because I doubted that it’s perfectly capable of going the mile on rugged terrain. It’s rather because God forbid something happened and I dropped it in the middle of nowhere, I’d probably still be there, waiting for someone to find me and help me pick it back up. So, sadly, no dirt for this Beemer.

The R 1250 GS BMW prepared for me was the Cadillac of tourers; the top-of-the-line GS Adventure. Along with the usual Bavarian goodies, the Adventure package adds a crash bar, a taller windscreen, a bigger gas tank, a different saddle profile, optional aluminum panniers, and a taller, long-travel suspension. The crew also added the optional GPS for good measure. These features do two things: 1) they jack the bike up; the seat now towering at 35.8 inches versus the standard GS’ 34.3 inches. 2) They add over 40 lb to the weight of the bike for a total of 591lb. As I was about to find out, these metrics have a considerable impact on how the bike handles and behaves, especially at low speed.

For my 5’8” stature, the biggest GS of them all was intimidating, to say the least. Maneuvering the 591-lb GS with only half to a quarter of my footing proved to be nerve-wracking at times. On the open road, it was a tremendously comfortable ride, but it was a tricky vessel to navigate through small European villages and snaking mountain roads.

Thankfully, the behemoth Beemer was equipped with standard hill start control, a feature I would have been happy to have were it not so invasive. A driveway incline is enough for the system to kick into action and lock the bike into place. The problem is that the friction point on the GS is extremely sensitive and the hill start control only turns off once you reach it. Only a few millimeters separate neutral from the friction point from the full release of the lever. That’s apparently something typical of the GS family I’m told, but it's still a little unnerving.

In normal riding conditions, finding the clutch's sweet spot became second nature. However, when the hill start control system kicked in, managing to hit the friction point while gradually increasing the output, all the while balancing on a static 600-pounder turned into a bit of a circus act. I killed the engine more times than I am willing to admit because of it. Thankfully, the system can be deactivated, if you can find your way around the onboard computer.

Figuring out basic settings such as suspension and driving modes is fairly straightforward—they’re right under your nose. Any other obscure setting that requires a deep dive in the computer, including the hill start control, feels like navigating a labyrinth. After two weeks of pressing every button and flicking every switch to see what everything does, I’m positive there are functionalities I never discovered.

The R 1250 GS runs on an entirely new 1,254cc, twin Boxer mill. The addition of 84cc to the 1200's displacement increased power from 125 to 136 horsepower. In comparison to my previous experience of the BMW Boxer in the saddle of one of the (too) many iterations of the R nineT, the one-liter boxer runs very smoothly. The quirky side-to-side rocking I experienced on the nine felt like a joyful purr sitting on the GS.

Also new this year is BMW’s latest fuel-saving pride and joy, the new Shiftcam technology. The system is BMW’s take on the variable valve timing technology, meant to improve low-end power and reduce emissions by optimizing the combustion.

The power delivery is smooth and linear, whether you choose to be more or less enthusiastic with the throttle. Take offs are easy, which is a good thing considering the size of the vehicle, and accelerations are responsive without being aggressive. Stopping power provided by the Hayes dual 305-mm discs with four-piston caliper at the front and 276 mm disc with dual-piston caliper at the back is extremely efficient without being to bitey. Even on the rare occasions I've applied the brakes more aggressively, I remained in perfect control of the bike, thanks among other things to the standard ABS.

Despite its deep growl that favors below-6,000 rpms, the GS had no issue matching the speed of zealous drivers on the German Autobahn. I comfortably reached speeds of up to 125 mph without having to beg too hard. I expected my first brush with the 125mph mark on a motorcycle to be a terrifying experience, but it wasn’t. The GS actually made it easy and comfortable. The motorcycle was incredibly stable—surprisingly so considering the aerodynamics haven't been designed with high-speed performance in mind.

It is also an extremely comfortable tourer. Exhibit A: one morning, I managed to spend nearly six straight hours in the saddle with only a short pit stop to consult my location and the remaining travel time on my phone. The saddle allowed me to shift position and change the pressure points while the pegs are positioned at a perfect "adventure" height, which allow dme to stand up and stretch my legs when I needed it without stopping. That's what I love most about traveling on adventure bikes. The massive 7.9-gallon tank gave me plenty of flexibility with my distances and provided me with an average autonomy of over 310 miles per tank.

While it doesn’t have a typical sport-touring silhouette, that’s the range I think the new GS best fits in. The definition of an “adventure motorcycle” is slowly spinning out of control as models that usually fit the bill are getting bigger and bigger and losing the essence of real adventurers. The new GS is no exception.

I questioned earlier during my trip whether the F 850 GS might have been better suited to my endeavor. All things considered, it certainly would have been more agile up in the mountains, but highway comfort wouldn’t have been comparable. Ultimately, I think BMW can be happy with its new-generation of GS flagships. After clocking close to 1,300 miles on R 1250 GS, I can confirm that it is a perfectly respectable descendant of the R line of adventurers—if only slightly less versatile than its predecessors. Blame it on the pounds.