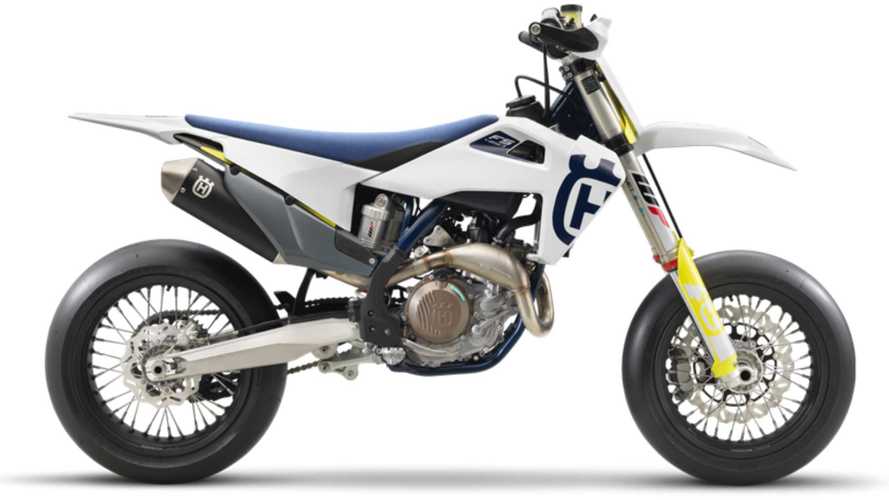 You read that right, a factory supermoto racer!

Are you lusting after a supermoto but don’t want to buy yourself a dirt bike and build one yourself? Have you seen some used supermotos on the market with dodgy upgrades? Are you intimidated by an attempt to source new wheels, spoon on new tires, buy and install new suspension pieces, and make other dirtbike upgrades that’d net you a supermoto?

Great news! Husqvarna still makes a factory supermoto and it’s pretty awesome; in fact, it's the only one currently on the market. The FS 450 is based on Husqvarna’s FC 450 motocross machine. The supermoto has two different fuel maps, adjustable suspension, Alpina tubeless spoked wheels, and around those wheels, sports Bridgestone supermoto slicks.

The bike got a ton of upgrades for 2019 so many things remain the same for the bike’s 2020 model year. Traction control and launch control remain standard. The 450cc liquid-cooled four-stroke engine still puts out 63hp, and the machine still weighs in at 103kg (227lbs). Husqvarna has upgraded the suspension for 2020 though,  from the WP AER suspension to the XACT suspension, with 280mm of front suspension travel and 266mm of travel in the rear.

The largest disadvantage many might find with this purpose-built supermoto is that it is not street legal. It’s a race machine, so those of you who are super into supermoto racing will not find it wanting. Those of you who would otherwise find a used DR-Z 400, put slicks on and call that a supermoto might want to do just that.

The suspension upgrades make this 2020 Husky even better than its predecessor, but a dedicated off road bike with racing slicks might be too niche-y for the masses. That said, perhaps going the opposite direction from the norm could work out: instead of putting supermoto tires on your dirtbike with its bargain basement suspension, buying this well-sprung supermoto and then slapping some knobbies on it for your dirty hooligan times could be your best option. It might be two bikes in one! Get some spare wheels for those dirt bike tires, though.