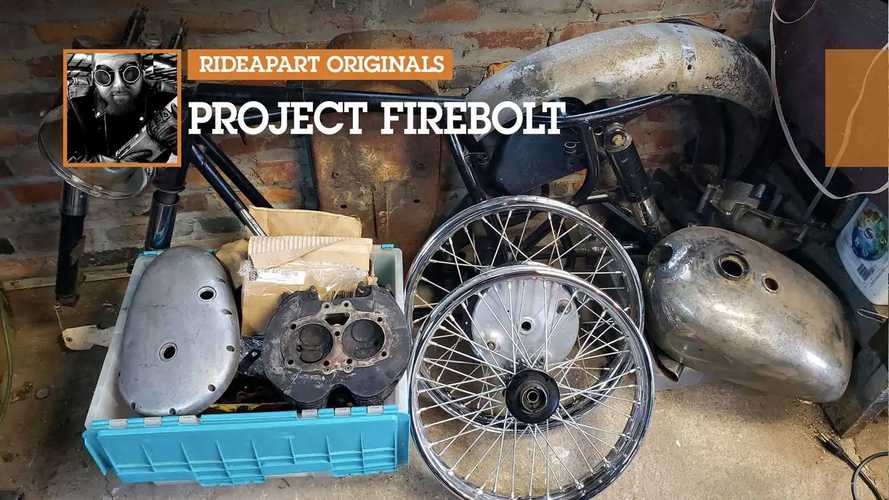 Welcome to Project Firebolt, friends! What is Project Firebolt, you ask? Well, cast your minds back to the beginning of 2019, when yours truly brought home that sad BSA basketcase that sat in the back of Todd's shop for the past decade. Remember that? Well, now that the Hondas are all done and we have the Scout in the long-term fleet, it's finally time to put that old Beezer back together. Firebolt, though? Yeah, Firebolt. A: BSA made a bike called the Thunderbolt (which this bike isn't but the Thunderbolt was an A65 like this one so just go with it), and B: the original donor bike was destroyed in a fire. It's kind of a reach, I know, but Firebolt sounds super rad so that's what it's called.

It's gonna be a really long haul, but I hope to have it running and rideable by April 1, 2020. Now, I know that's an oddly specific date, but I picked it largely to win a $100 dollar bet with a buddy of mine who said it couldn't be done. So, yeah, I'm about to spend three grand-ish to win a hundred bucks and it's gonna be awesome. Let's get started, shall we?

Well, it's on the jack. Now I have to do it!
Inventory time!

I've already started in on some of the project's preliminary work. I threw the frame up on the jack, mostly to make the statement that the project is now on. I did a little digging and discovered that this particular frame is from a '69 Lightning, which is pretty cool. I did a thorough inventory of all the parts I have (most of another A65 engine, especially internals, and some assorted body parts), and made a general plan of attack. Oh, and I finally bought an engine!

Check that out! Now, uh, it clearly needs work but it's nearly all there so it's on brand for this project. Also, the price was right (essentially pocket change) and I can do all the work myself and learn a bit about old British engines while I'm at it. The engine is out of a '66 Hornet, a pretty rare bike that was BSA's "Desert Sled" factory dual-sport bike and a favorite of Steve McQueen.

Figuring out what I have and what I need.
Moxie is the goodest girl and an excellent shop assistant.

Now I have the best part of a whole bike, I just need to bolt it all together. Sadly, I still need some parts—pistons, wiring harness, engine internals, gaskets, bits and bobs—and that's gonna be expensive. To offset the cost a bit—I'm a writer, guys. I'm not made of money—I reached out to some parts suppliers to see if they'd be so kind as to sponsor the build. To my delight (and, honestly, surprise) the team over at Classic British Spares took me up on the offer and donated some parts. We'll talk about that more when the time comes, I just wanted to mention it and give them a shout out for their generosity.

Over the next couple of weeks, I'll be tearing the Hornet engine down and rebuilding it—the first of many steps in this project. There will be a ton of pictures and a lot of me pissing and moaning about the dismal late-60s British build quality (what is tolerances, precious?). It should be pretty fun, so stay tuned!