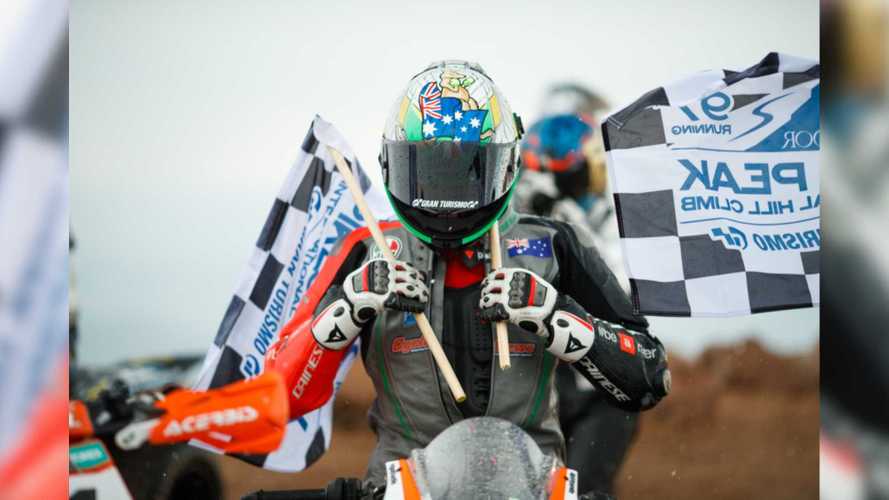 The lion still roared atop the mountain.

When you’re racing, unless any specific event happens directly within your sight lines, chances are excellent that you won’t know about it until after your race is run. That’s precisely what happened for 2019 Pikes Peak International Hill Climb Heavyweight category motorcycle winner Rennie Scaysbrook. As he finished the race, he had absolutely no idea what had happened just moments before—and when he found out, he was filled with a profound and lasting sadness, like the rest of the international motorcycling community.

Gold Lion's Gonna Tell Me Where The Light Is:

“The event was spectacular, until we heard of Carlin’s Dunne’s accident,” Scaysbrook said, shortly after the event. “Carlin was a huge part of my Pikes Peak experience, helping me as a rookie in 2016 as a mentor, then going head to head with me in 2018—a race he came out the winner. Carlin was a gentleman. As the final two competitors to start the race this year, Carlin shook my hand and wished me luck, as we both told each other we’d see each other at the top. The world has lost a true champion.”

Scaysbrook rode his Aprilia Tuono Factory to a 09:44:963 finish time, which beats Chris Fillmore’s previous record of 09:49:625. Not only did he and Aprilia win the race—but together, rider and team also set a new heavyweight record that was bittersweet once he heard the news.

Racers may differ on plenty of other things, but most tend to be very clear-eyed about the dangers associated with this thing that they love. Although it involves absolutely no motorcycles whatsoever, I can’t help but think of the final scene from the John Frankenheimer film Grand Prix. For those unfamiliar, it’s a glorious, semi-fictionalized time capsule of a year’s worth of Formula One racing that was released in 1966.

In the film, after driver Jean-Pierre Sarti (played by Yves Montand) suffers a terrible and fatal accident while racing in anger at Monza, the rest of the competitors around him—as is usually the case when a racer goes off track—simply continue racing, completely unaware of what occurred. At the end, driver Pete Aron (played by James Garner) wins the race—only to find out the horrific news about what happened to his fellow competitor, whom he had very much respected.

The film’s ending sequence eloquently illustrates the complicated feelings of a race winner under such terrible circumstances, and I’ve yet to see a piece of media that does it better.