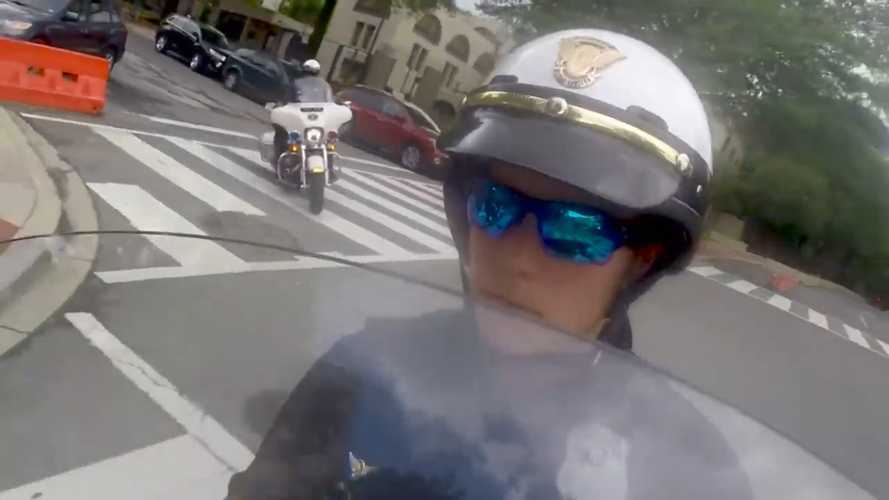 Officer Technician Alta "Lauren" Gunawan is the first woman to ride a motorcycle while protecting the President.

We've all seen the fleet of Harley-Davidsons in the Presidential motorcade, clearing the way for the armored limousine affectionately known as "The Beast." One of the newest members is Officer Technician Alta "Lauren" Gunawan, the first woman to be a part of what must be the most elite motorcycle unit in law enforcement.

It's Got A Cop Suspension, Cop Shocks:

The Police Motorcycle Rodeo Is Coming To Pittsburgh
⠀

Take A Wild Ride In This Brazil Police Chase

The 14-member motorcycle unit is responsible for spontaneously stopping traffic at intersections ahead of the motorcade as it approaches, then covering and protecting the motorcade until it safely passes by before shooting ahead to the next open intersection. It's a tough job in itself, but the stakes are even higher when the person you are protecting is the President of the United States.

Gunawan started riding when she was in college. "My friends all had bikes and I wanted to be a part of that group," Gunawan told CNN. "I went ahead and I took that leap, took the safety course, started falling in love with it. The freedom that I get riding is, you can't compare it to anything else." Clearly, she understands what riding is all about.

Gunawan's grandfather was an auxiliary police chief in her home of Illinois, so she gained an appreciation of law enforcement at an early age as well. "I've always wanted to give back to my community and be able to make my grandfather proud," she said.

After joining the Secret Service, Gunawan took the difficult two-week course to join the motor unit. It has only a 40 percent pass rate. At five feet, four inches, and 150 pounds, the most difficult part for her was picking up the dropped Harley, which weighs 1,100 pounds in full police trim.

While only men have served in the motor unit before Gunawan joined, they are not restricted from applying. The requirement to be able to pick up the fallen motorcycle, however, has been more than previous female applicants could handle, as well as many men. While Gunawan may be the first woman to join the motor unit, she hopes she isn't the last.

"I don't want anybody to think that they can't get something," said Gunawan. "If you put dedication and hard work into it, you'll get it and you'll achieve your goals."