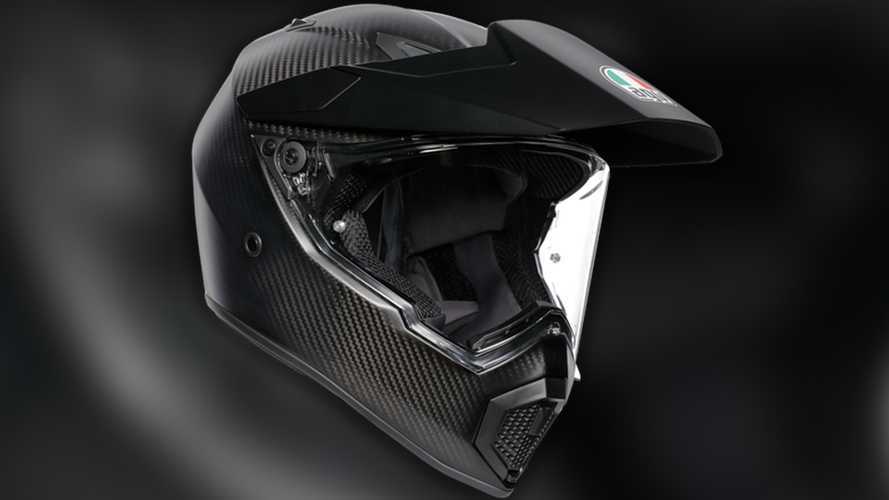 The AGV AX9 is the evolution of the popular AX8, a helmet that was introduced in 2011 to generally positive reviews. Seven years and ten iterations later, AGV took all the ingredients that made the AX8 and its variants good lids and kicked them up a notch. This resulted in the next-generation AX, numero Nove.

Other Gear To Check Out:

AGV slots this helmet into the dual-sport category where it combines features reminiscent of a motocross helmet with that of a road-oriented model. In fact, while the 8 leaned more towards the off-roading category, the 9 dials it down and slides the dimmer to the roadside. For example, the opening in the helmet is narrower than it is on the 8, which makes it harder to accommodate goggles.

The model I tested is the AX9 Carbon version, with an outer shell made of carbon fiber. Because I like a cleaner profile on my helmets and don’t dig the cap look of the peak, I opted to remove the one that comes standard on the AX9. Removing the peak was easy and only required I use a quarter to remove the screws—the type of tool everyone has on hand.

While AGV provides rubber plugs to replace the screws that hold the peak in place, just take the extra minute to put the actual screws back instead. The rubber plugs are cute and all but are easily flicked off. I consistently find them at the bottom of the helmet’s bag, likely blown off by a sneeze. At this point I’m already missing two. Because the thread holes are a direct access to the inner layers of the helmet, I highly recommend plugging them to keep rain and dust from getting in.

The visor is made of thick and sturdy plastic. You can feel how solid it is when you lift it up; it doesn’t wobble or distort. AGV takes a lot of pride in developing visors that increase the helmet’s safety instead of a simple piece of plastic you can see out of. Another feature I like of this visor is the dual lip, positioned on each side of the massive chin vent which allows you to use any hand to open it. The thickness of the material also makes it a bit heavy so just be aware you need to give it that little extra push to lift it. The three-degree opening is ok, but I’ve only really used it in the fully opened and fully closed position because of the following flaw.

The one slightly annoying feature of the visor is the grove that lines the rim. Because the greenhouse is already a little limited due to the shape of the helmet, the grove limits visibility even more. This also means that positioning the visor in the two intermediate opening positions with the visor in front of your eyes creates a distortion.

Right out of the box, the AX9 fit me like a glove. The model is designed to fit intermediate oval heads better—but my rounder head felt at home right away, without any tightness. It rests in the right spots on the head without applying pressure in the wrong ones. I didn’t need to “get used to it” or tap the pads a little to get cozy. It was comfortable and I was able to wear it for long periods of time right away.

While I’m touching on the subject of comfort, the AX9 is also surprisingly well ventilated. Of course, the size of the Darth Vader-esque chin vent is a giveaway as to its ability to circulate air. There are two pieces to that vent. The "top vent" is equipped with an open-close mechanism and a filter. It can be removed to expose a shell-integrated vent that provides a more direct air intake. The vents on the forehead look minuscule in comparison, but this is definitely a case of “size doesn’t matter”.

You can feel the difference in air flow when you open and shut the head vents. While the feeling is subtle, it is enough to help keep the head cool in 85-degree weather. I didn’t get too hot wearing the AX9, except on the rare occasions I got stuck in traffic. Unless your lid has AC, little can be done to beat the heat of the blazing sun when you’re stuck walking your bike along to the beat of construction-induced traffic.

I got the chance to test the helmet while I was touring in Europe which meant long hours in the saddle. At 3.4 lb, it is light enough not to tire the head or the neck even after an entire day of riding. The shell is also aerodynamic enough that no matter what bike I get on, whether I have a tall windscreen or none at all, the helmet remains very steady at highway speed. No buffering caused by the wind.

Should you wish to install a comm system into your AX9, a cutaway has been added inside the helmet to accommodate one (another great update over the AX8). The lid is homologated DOT and ECE 2205—but doesn’t sport a Snell sticker.

The new AGV AX9 is offered at a starting price of $499.95 for an entry-level, solid black or white model. Note that the standard composite shells make them slightly heavier. The Carbon version I tested is priced at the top of the range at $629.95.