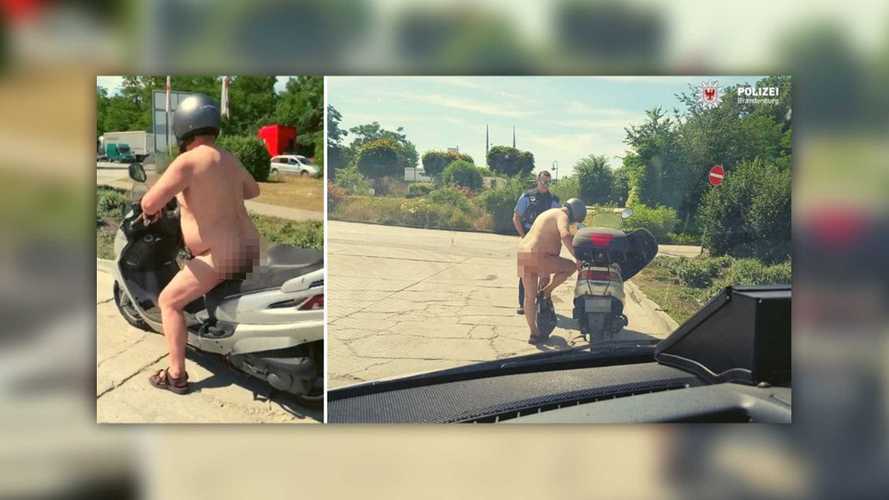 That's one way to beat the heat.

There are plenty of good ways to beat the summer heat while out for a ride. Mesh or perforated leather jackets with plenty of vents, for example, or one of those air conditioned helmets. You could also go without your gear, which is a totally legit option but one we don't recommend. One brave—or foolish, depending on your outlook—rider over in Ze Fazerland went one step further and decided to go for a ride sans clothes and, well, it turned out pretty much the way you'd imagine.

According to the Brandenburg Police Department's Twitter feed, a patrol officer spotted a middle-aged scooter rider tooling around the city in his altogether on June 25, 2019. Due to an ongoing heat wave caused by hot air blowing up from the Sahara, the temperature in Brandenburg was a balmy 93 degrees by Fahrenheit's thermometer. It stands to reason, then, that a rider would go to extraordinary lengths to stay cool on their commute. Riding naked, though? That's a bridge too far.

The officer stopped Der Nackte Mann after, I can only assume, laughing hysterically in his car for a while. No word on whether or not the scooter rider was charged with anything, but the Brandenburg PD did post a picture of the incident on its Twitter feed and asked followers to caption the image. As you can imagine, hilarity ensued and a good time was had by all.

It's been pretty hot in continental Europe lately. In fact, Business Insider said that Europe is on track for its hottest summer since 2003, a summer in which the searing heat killed between 50,000 and 70,000 people. To say that Europeans are worried about this summer is an understatement. I think, however, that naked riding may not be the best way to deal with the heat. At least he was wearing a helmet!