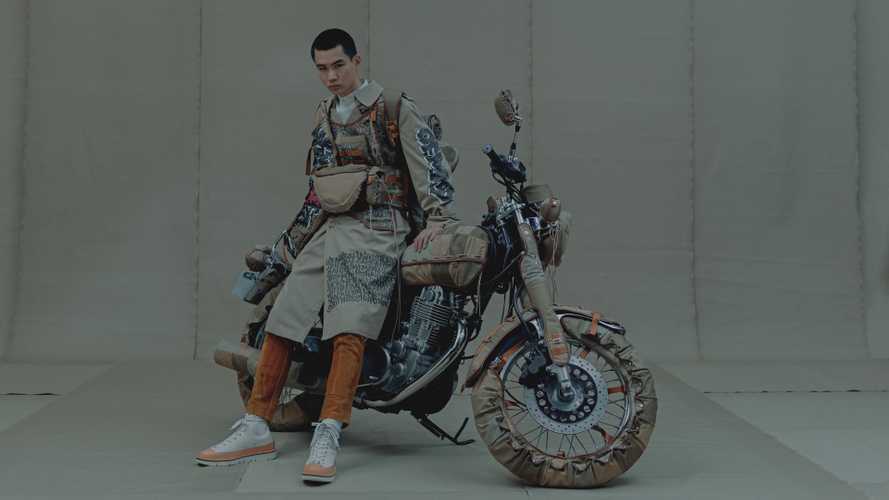 For when your bike needs clothes just as much as you do.

When you’re truly into your craft, you’re constantly drawing inspiration from everywhere. That’s one thing that Yamaha and designer Hideaki Shikama of the Japanese fashion house Children of the Discordance have in common. Sometimes, the outside world informs your art—and sometimes, your art informs the outside world. If you’re very lucky, the inspiration flows both ways.

According to the Japan Times, Yamaha presented Shikama with two of its most faithful thumpers: one SR400 and one SR500 to inspire him. Shikama then utilized those two bike designs as motifs for his creations in his new collection, called Over.

The designer wasn’t content to merely draw inspiration from the bikes to inform clothing he made for humans, though. Instead, he found himself designing clothing that was meant to be worn by the bikes themselves—and that could later be removed and worn by the rider in military-style backpack form.

“I felt a strong affinity with Yamaha’s Monozukuri ideal that values how people feel and sense things more than numbers,” Shikama said. “Particularly, Yamaha believes that when a person and machine ‘become one’ and are able to ‘communicate’ that there’s a joy created from that relationship, and that’s something I found really special. I think that’s also how it should be for clothes and the people who wear them.”

Although this was Shikama’s first time collaborating on such an industrial project, he also said that he felt his creative horizons were broadened because of the experience. This isn’t surprising, since Shikama previously remarked to High Snobiety that he draws influence from everywhere: skating, music, hip-hop, hardcore, and basically everything he’s ever been interested in throughout his life. In creation of his fabrics, Shikama also tries to practice as much ethical sourcing as he can, which is certainly admirable.

“I believe in paying full value to those embroidery craftsmen,” Shikama told High Snobiety. “It motivates them to do their best work as it brings them a better life. I never negotiate discounts with the domestic partners we create our collections with. I will continue to work as I do now. For me, there is absolutely no room for compromise when pursuing better quality.”

This isn’t a one-time occurrence, either—it’s a way of life for Children of the Discordance. In a profile for the 2019 Amazon Fashion Week Tokyo, it mentions that the brand “introduces fair trade products for the people such as from Zapatista (Mexico) and Masai tribesmen (Africa). Plus, as one of their noteworthy activities, they release the products produced by the one and only remained domestic textile factory in Palestine for women and kids in refugee camps.”

For more information and photos, check out the official site.