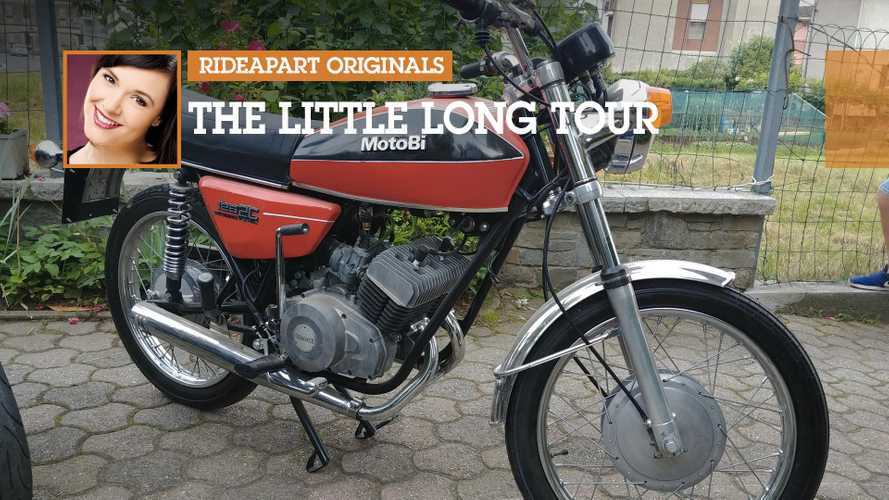 It's dusty, smoky, stinky, but it's family!

There is an elite list of names that comes to mind when touching on the subject of famed Italian motorcycle brands. Just like the Japanese Big Four, Italy has its own Big Four with Ducati, MV Agusta, Aprilia, and Moto Guzzi ranking at the top of the most prominent Italian brands. What if I say MotoBi? Chances are you have no idea what I'm talking about. Not anymore: let’s meet the MotoBi 125 2C Elettronica together!

The beauty of traveling by motorcycle is that it encourages people to share their own bike-related stories and even to show you what’s hidden under the tarp in their garage. RideApart's BMW R 1250 GS and I have been enjoying a break from all the traveling to stay in my family in the Italian countryside where everyone owns their own personal treasure trove a.k.a. a big garage where things get lost and forgotten. Most of my cousins here love motorcycles as much as I do if not more, so they all have their own hidden treasures that they all proudly show off when they get the chance.

For instance, one of them has his grandfather’s old Lambretta 125 scooter under a blanket awaiting its trip to the mechanic for a proper tuneup. The one I am most interested in, however, is a dusty red 1976 MotoBi 125 2C that’s been sleeping in my great aunt’s garage for a few years. It actually belongs to my dad.

MotoBi was founded in 1950 by none other than Giuseppe Benelli, one of the brothers who created the eponymous motorcycle brand in 1911, the oldest in Italy. After a few years, Giuseppe decided to leave Benelli to do his own thing. After a short stint trying to start a car company in the years following World War II, Benelli returned to his first love: motorcycles. In 1949, a prototype of what was to become the B 98, the brand’s very first model, made an official appearance before the production model was launched in 1950. The company specialized in sturdy, small-displacement two and four-stroke mills, which helped establish MotoBi's favorable reputation reliability.

Roughly a decade after its creation, MotoBi faced serious financial hurdles which lead to its absorption by Benelli in 1962, hence forming the Gruppo Benelli-MotoBi. At the time, the MotoBis were marketed as the sportier alternatives to the Benellis. By the time the company shut down in 1977, the lineup had been gradually trimmed down to only scooters.

Today, the MotoBis are quite rare and most found on the used market sport the Benelli badging which makes this 1976 MotoBi unit even more precious. It runs on a 125cc, two-stroke, two-cylinder engine, uses a drum brake at the front wheel, dual shocks suspension at the back, and don't be fooled by the "elettronica", it still needs a kickstart to run. A proper vintage setup if I've ever seen one. An uncle of my dad’s actually gave him the bike ages ago. Instead of leaving it to gather dust in the pits of a relative's garage, my dad decided to arrange for the bike to be tuned up, something a local mechanic did during his free time.

While visiting my great aunt, my dad’s cousin took the MotoBi out for me to check out. After a bit of a workout, we even managed to get it to run—smoke and fumes included. The restored MotoBi has been waiting for my dad to visit, something he hasn’t done in years, so a little spin around the courtyard to stretch its wheels was long overdue. My dad has given me his permission to take it out for a spin, so guess what I’ll be doing tonight.

It’s not perfect: it smokes, it stinks, it fails, but hey! It’s family.