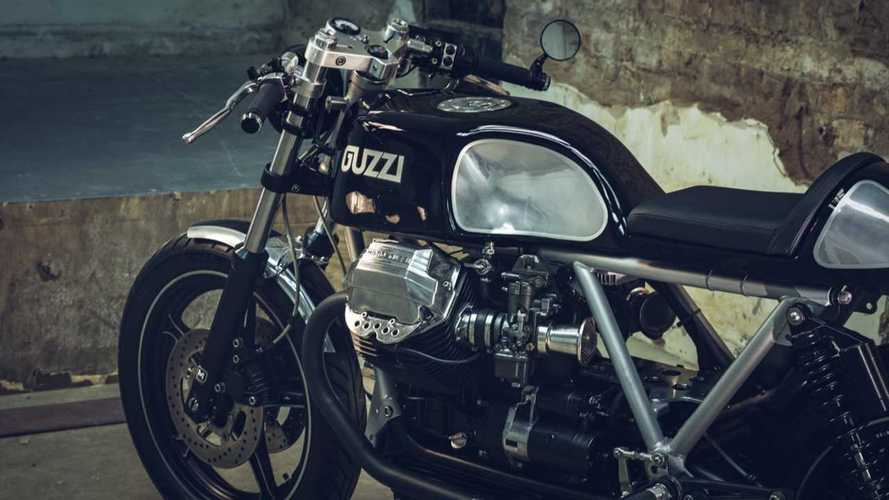 If you didn't like Guzzis before, you will now.

Customizing a brand new bike is one thing, but resurrecting an old bike that doesn’t run is entirely another and, to my mind, a much nobler quest.

Such was the case with this mid-eighties Moto Guzzi LeMans 1000. If you know Moto Guzzis at all, you’ll remember this particular machine was famously both loathed and loved. Journalists of the day loved to hate it. By every metric it was a mildly flawed but very well-built motorcycle.

Now, thirty-three years later, all of the contemporary complaints about the bike seem a bit cute; it is an old bike and so we do not expect much of it. It is an old Italian bike, in decent enough shape to resurrect, and so all we want from it is a pretty bike that’s not too terrible to ride. We accept the “old bike” handling because, really, anything from that era cannot really compare with anything from this era, and that is not its purpose.

This particular machine was brought to Side Rock Cycles, a repair and customization shop on the south central coast of the United Kingdom, which mostly specializes in airhead BMWs. The bike's owner brought the LeMans in, and after a bit of time together scoping, the shop and customer agreed on a direction and a color scheme, and then the shop tore the bike apart and went to town on the thing.

The bike’s engine and transmission were in fine shape all these years later, and just needed a little cleaning up. It didn’t run because its wiring harness was a mess, and I’m guessing it also probably needed some attention paid to its carburetors. Side Rock custom-rolled a wholly new wiring harness for the bike. They polished every part that was bare aluminum alloy to a shine. They powder coated the frame black and silver, and gave the bike an LED headlamp, a custom-machined top triple, LED rear signals, and a keyless ignition.

They replaced all the fork internals as well as the back with Maxton Suspension parts, so the rear of the bike is now sprung with fully-adjustable remote gas reservoir shocks. There is no word on whether the bike had, or kept, its much-maligned 16” wheels; if I had to guess I’d say the previous owner probably would have replaced them with something a little easier to shoe.

The best and most fun part is this: Side Rock Cycles put the bike on display at the MCN custom motorcycle show in the UK, and that’s where they revealed the finished product to the bike’s owner. Hey, that's your bike! Ta-da!

Head over to Side Rock Cycles' page for a ton more pictures of this build and some other total eye-poppers.