The Little Long Tour: Today, We Learn That Germans Lust Over BMW 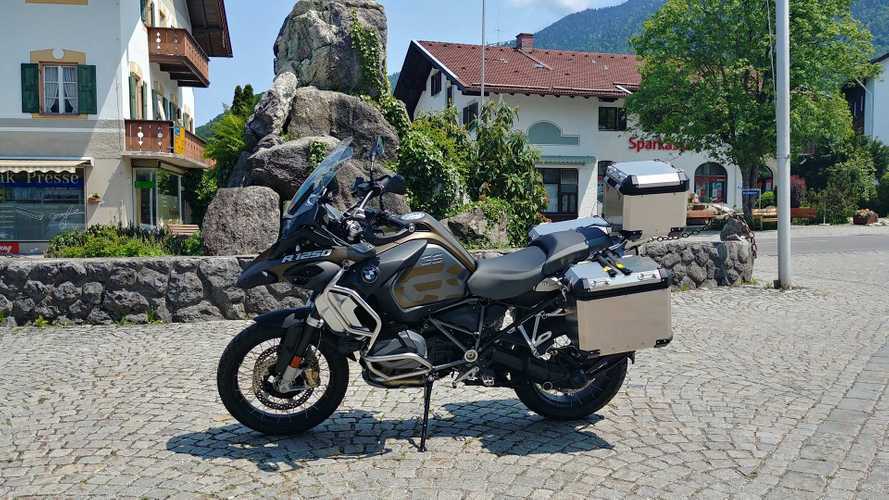 So they do have emotions.

Americans don’t have a monopoly of national pride. You’d never think looking at the Germans that they feel anything—they’re a generally stoic and practical people. If you tell me you know one who smiles and laugh, I’ll answer  that you’ve met the one specimen that escaped the lab. What I find incredibly fascinating, however, is just how thirsty they are for BMW.

Today, I made my way from Munich, Germany all the way to Telfes, Austria, just south of Innsbruck. I clocked in well over 100 miles on the bike on this first day, after picking it up from the BMW press fleet office on the outskirts of Munich earlier this morning.

See what I was saying earlier: their press vehicle garage looks like it has been designed by Patrick Bateman from Psycho. I almost would have eaten off the floor. Picture a grey, concrete bunker dimly lit by austere spotlights and daylight seeping through massive opaque windows. Everything is clean and shiny, from the cars to the floor. Germans are so precise and proper. Until they see a BMW apparently.

Once I hit the streets of Munich, heading south, I started getting the looks. People rubbernecking in their car, trying to get a better look at the bike, silently nodding in approval. I expected Germans to like BMW, but not to that demonstrative extent. Thumbs up, smiles, silent contemplation. I’ve never seen Germans so excited—except for soccer.

I stopped at a gas station to adjust my gear and watched two guys walking around a very regular-looking BMW 3 Series with some slight bodywork modifications. One of them was caressing the door handles and the two were obviously discussing the vehicle with passion (they weren’t being creepy, the car belonged to one of the guys). I felt like a peeping tom nonetheless.

Not that there’s anything wrong with the look of the R 1250 GS or any other BMW car or motorcycle. They are good-looking vehicles.  but I would have expected that kind of lustful behavior over say an Aprilia or a Ducati—gosh, even the S 1000 RR. Not over the big, bulky Bavarian ADV.

Things got slightly less uncomfortable when I left the outskirts of Munich and landed in the country side with hundreds of miles of quiet roads laid out ahead of me. I avoided the highways (thanks Google Maps!) and traveled mainly down road B11 through Germany.  As you ride closer to the Alps, the long stretch of the 11 starts swirling, carving its way up the mountain.

The R 1250 GS has soldiered through our first day together like a champ—if anybody was going to let anybody down, it was me. I’m 5ft8, so the GS tests the limits of my balance on the tip of my toes. As promised by its moniker and the model’s legacy, it’s been a great traveling partner. When you have two decades of experiences in adventure touring, it definitely shows.

While the GS has been very well behaved until now, I’m left wondering if the F 850 GS would have been better suited for the kind of serpentine roads I faced today and will face tomorrow as well as I tackle my first Alps crossing of the trip. 1,254cc almost feels like a bit too big of an engine. It’s a little grunty at low RPMs in third gear which is great for acceleration, but not when you need to go at a steady 30-35 mph in the bends, which incites me to downshift. However, the second gear is a bit short, perfect to follow the first in acceleration but not so much for cruising.  Maybe I just need to get used to it and find the sweet spot.

This is only the beginning of the trip—tomorrow I’m heading to Vicenza, in Italy where I have a full schedule hanging out with the people at Dainese to take you behind the scenes.