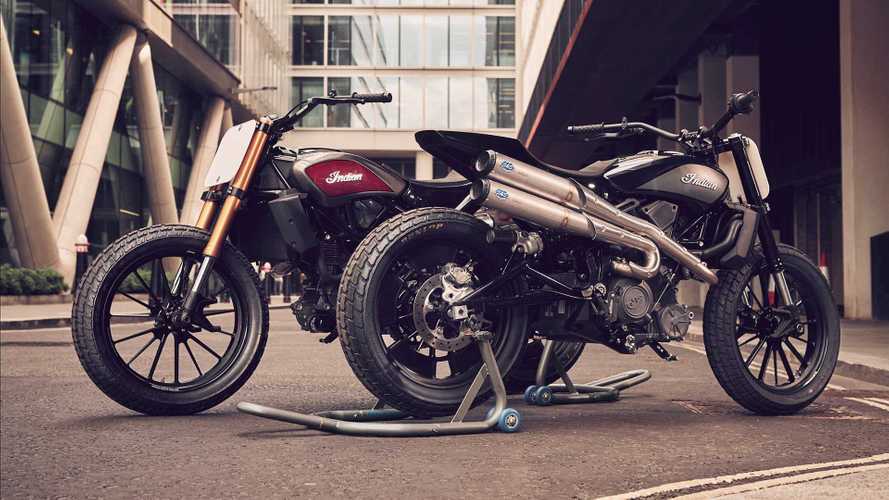 The FTR is going back to its roots.

There’s one thing Indian has been excelling at for the past three years and that’s flat-track racing. The factory team, the Wrecking Crew, has been dominating the dirt oval with Jared Mees in the lead. The manufacturer scored a home run with the introduction of its new FTR 750 dirt warrior, so much so that it too everything it learned on the flat track and applied it to a street-friendly bike. Thus the FTR 1200 was born. Now, we’re about to find out how whether the 1200 has the same racing chops as it competition-specific counterpart with the Indian FTR 1200 Hooligans.

The two specially-prepared FTR 1200 are the work of Wisconsin-based shop S&S Cycle, incidentally Indian’s official part supplier on the dirt track. The two FTRs have been significantly modified to go from street to dirt tracker. The exhaust pipes have been re-routed to high-set tips, the headlamp has been removed and replaced by a number plate, sitting on top of the new S&S billet triple-clamps meant to increase and improve steering. The new clamps also decrease the rake angle, making for a slightly shorter wheelbase.

The front brake has been stripped down and the 19 and 18-inch cast wheels have been replaces with Roland Sands Design circles. The front inverted fork has been stiffened and the rear suspension has been replaced with a FOX FTR 1200 race monoshock with remote reservoir teamed with a new, shorter swingarm.

A reworked frame positions the footpegs higher up for improved ground clearance and the new subframe receives a smaller battery and a carbon fiber tail. All and all, these modifications has allowed the FTR 1200s to shed a significant 55 lb.

The two Indian FTR 1200 Hooligan will hit the track in the second round of the European Hooligan Championship during the Wheels & Waves event taking place in Biarritz, France. The two track-to-street-to-track bikes will be raced on the dirt oval by Krazy Horse’s teammates Lee Kirkpatrick and Leah Tokelove.