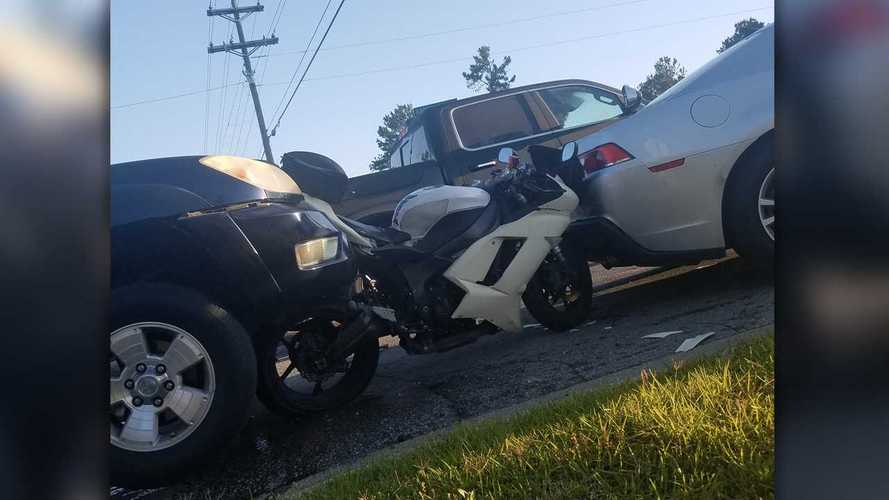 Safety or efficiency: pick your argument.

Only one state currently allows lane filtering on paper. Utah passed a bill earlier this year, legally allowing motorcyclists to perform the maneuver. While highly debated, the matter of lane filtering has been proven to keep riders safer. For some drivers, it seems “unfair”. For most riders, it can be life saving and be the difference between still having a bike or not.

Call It Safety Or Call It Efficiency:

This picture was posted to Reddit by user r/DustinFT114. Coming to a stop, he got rear-ended by a driver, blinded by the sun. Thankfully, he walked away from the crash. This, guys. This is why we need lane filtering.

While in motion, on the highway, when someone around us does something dumb, if we’re aware enough of our surroundings, we’re usually able to react safely and avoid a bad situation. When stopped at a traffic light, however, our escape routes are a little limited and we are more vulnerable. Especially since, since we’re not moving, we tend to let our guard down a little bit and count on the fact that the person behind us is going to stop—or so we hope.

So we release the handlebar, shake our hands, stretch out a bit, and just chill until the light turns green. True, it is highly recommended to stay in first gear with a hand pulling the clutch, ready to sprint into action in case someone comes in hot. This is the proper procedure, however, we’re human and we’ve all needed a quick stretch before. While I do make it a point to make sure the person behind me is slowing down, I can’t say this is something I think to do 100 percent of the time. Again: we’re human.

Of course, just like us, drivers slowing down to a stop also relax their attention a bit, some a little too much. Because of the low speed, the driver might choose to have a look at this cellphone (for directions or for a message), thinking it’s a perfect time to see what he missed out on. Other times, the driver, like the one in our study case, can be blinded by the sun in his eyes or have to deal with reduced visibility conditions. He could also be distracted by his crying kid, his dog pooping on the passenger seat, or his wallet falling between his seat and armrest. There are countless scenarios that can lead to a driver not paying attention to what’s in front of him.

While a car bumping into another car creates a frustrating but rarely a lethal situation unless the incoming driver suffered a stroke and doesn’t even put the foot on the brake, a one-ton vehicle ramming into a 500-lb motorcycle, even at low speed, causes a lot more damage.

To uninformed car drivers, lane filtering might look like an act of entitlement since it takes us to the front of the line seemingly for no other reason than “our vehicles fit between rows of cars”. What lane filtering actually does, if practiced safely, is remove motorcyclists from a vulnerable situation. Why it shouldn’t bother drivers? Because bikes can get out of the way a lot faster than a car, so by the time the car at the front of the line gets moving, the motorcycles are long gone.

If safety doesn’t convince you, think in terms of efficiency. There is also the added benefit that instead of having motorcycles taking up car-sized spaces within a line of waiting vehicles, motorcycles can be lined up at the front of the pack, allowing more cars to come through and move ahead in situations of heavy traffic. In a lot of European countries, lane splitting and filtering aren’t necessarily about safety, but also about efficiency.

There is still a way to go before lane filtering (and/or lane splitting) gains more ground in the United States, but small steps are being taken which is a good thing. But this is a reminder of why, in my opinion, we need lane filtering. Ultimately, our fellow rider DustinFT114 was lucky and didn’t get hurt in the crash, the driver took full responsibility for the incident, and things seemingly worked themselves out. But he might not have been put in this situation in the first place had he been allowed to filter through the traffic.