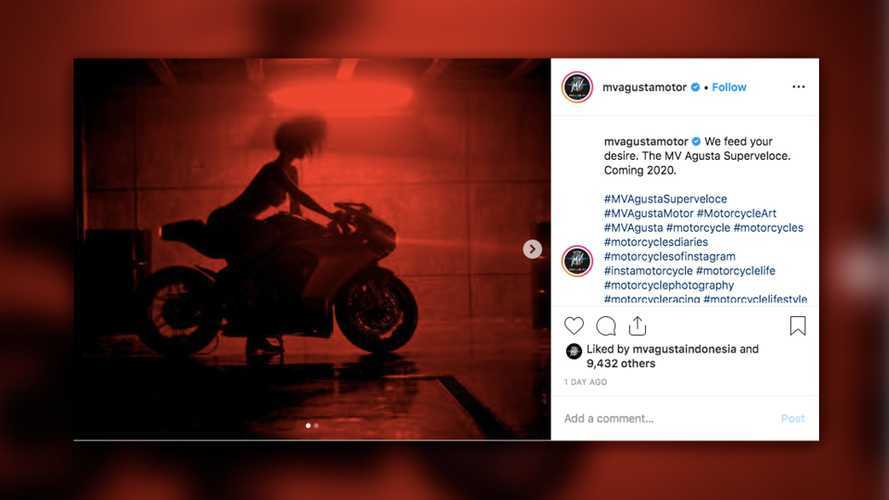 A blast from a racing past.

At EICMA last year, MV Agusta took the stage with a gorgeous concept: the Superveloce 800. Already at the time of the launch, the manufacturer was adamant that it would move swiftly to get production of the model underway. We now get our first look at the production model’s teaser. The Italian brand took to Instagram to give us a peek at the production version of the Superveloce with the promise of the bike coming for 2020.

The design of the Superveloce is a very obvious look back at the brand’s motorsport legacy and a wink at the 1960s 500 Three that helped Giacomo Agostini carve his name in racing history. While no details regarding the build and specs of the model, we can clearly spot the trellis frame, peaking from the carbon fiber fairing. In true 500 Three fashion, the Superveloce adopts the dustpan look—a modernized version of it with aggressive character lines converting to the striking round headlight. The design of the concept nicely contrasted the red and silver bodywork with black and golden component.

At the back, the cantilever saddle ends on a rounded tail sporting a jet engine-like round taillight. The concept was shown with an interesting exhaust layout, with two mufflers on the right and one poking out on the left—hinting at the model’s powerhouse layout, likely the 798cc three-cylinder mill borrowed from the F3—another . On the F3, the engine is rated at 148hp and 65 lb-ft of torque with a top speed of 150 mph, however, there was talk of a horsepower boost through remapping of the inline-three.

The company’s social media post says the model is coming in 2020 so it will likely roll out of production at the end of 2019 (as per the original timeline) or in early 2020. We won’t have to wait that long to see the production version of the bike, however, as we’re likely to see an official introduction before fall rolls back.

Kobe Bryant, Basketball Legend And Motorcyclist, Dead At 41
Watch This Sportbike Rider Try A Harley Fat Bob
The 5 Best Touring Motorcycles
This Is What It Takes To Make It As A Custom Builder
Gorgeous British Custom: The Yamaha Yard-Built Type 11

Kobe Bryant, Basketball Legend And Motorcyclist, Dead At 41
Watch This Sportbike Rider Try A Harley Fat Bob
The 5 Best Touring Motorcycles
This Is What It Takes To Make It As A Custom Builder
Gorgeous British Custom: The Yamaha Yard-Built Type 11
Commenting Guidelines