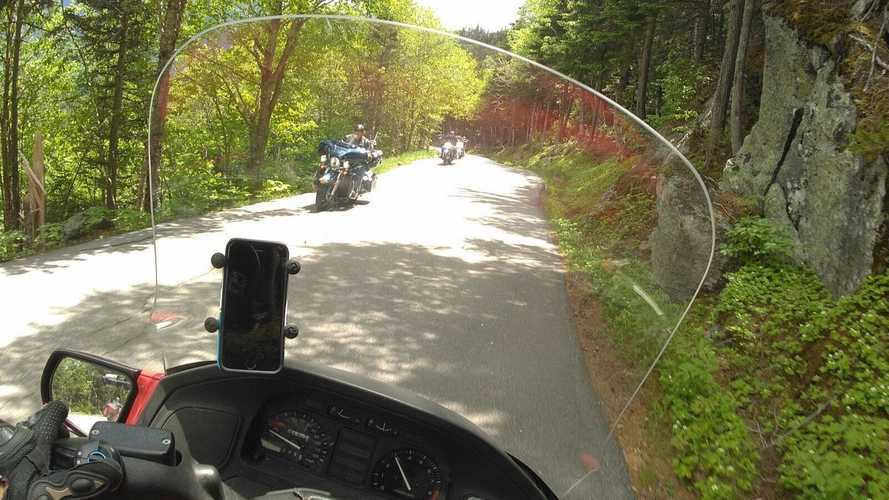 There's a fine line between a spirited ride and too fast for conditions.

Sometimes you're just out for a quiet scenic ride. Other times, the twisties are calling, demanding you to test your skills on them. If you want to push yourself and your bike to the limit, take it to the track, but there's nothing wrong with a spirited ride on quiet challenging roads, as long as you take certain precautions and do it safely.

By now, I don't need to tell you that the street is not your own personal race track. Even quiet roads have too many unknown variables to take it to the limit one more time, not the least of which is Johnny Law and the risk of receiving a "performance award." There's a fine line, however, where you can go fast enough for it to be fun and challenging, yet not so fast that you can't react to and avoid an unforeseen hazard.

Some call this technique "The Pace." For me, it's more of a feeling I get when I'm challenging myself on a technical road and setting myself up to succeed no matter what. The idea is to have fun as well as make sure you make it home in one piece, all at the same time. It's all about knowing your abilities and limits, as well as those of your bike, and making sure you remain within them at all times, even when the unexpected happens.

I recently moved to New Hampshire, and have discovered a vast array of fun roads to explore when I decide to take the long way home from work. I was on one of these the other day when the surface smoothed out and the path of the road looked like a small child had haphazardly scribbled it across the map. I proceeded to do as Captain Kirk once told Mr. Sulu and "indulge yourself." I was enjoying the twisties, but I was always aware that I didn't know this road well, and gave myself an extra safety margin despite my brisk pace. I ended up using this margin in one corner that unexpectedly tightened up on me. Anyone watching me would never have known I'd messed up. I didn't even cross the center line. My line had still run about a foot wider than I had intended, nothing major, but I knew I'd gotten it wrong. Had I been pushing harder, I would've crossed the center line, which would've ruined my day had a car come along at the wrong time.

I took note of my error, then continued on my way. A few miles down the road I was going around another tight curve and suddenly saw a turkey standing precisely where I had intended to place the bike. I was already leaned pretty far over, but I was able to maintain speed and redirect my line to aim for the outside of the turn once I saw the turkey running toward the inside. Here I'd made no mistake, but I'd suddenly had to change course because of the unexpected Thanksgiving dinner in my way. Once again, I had enough capability left in reserve to deal with the unexpected situation. If I'd already committed to the apex of that turn, I wouldn't have been able to turn away from it when I had to.

Despite a couple of Moments (TM), it was a fun ride that I definitely intend to repeat, though preferably without the Moments. Still, I made it home safely, which is Job One anytime you go out for a ride. Safety doesn't have to be a dirty word that kills your fun. It's possible to strike a balance and have both.