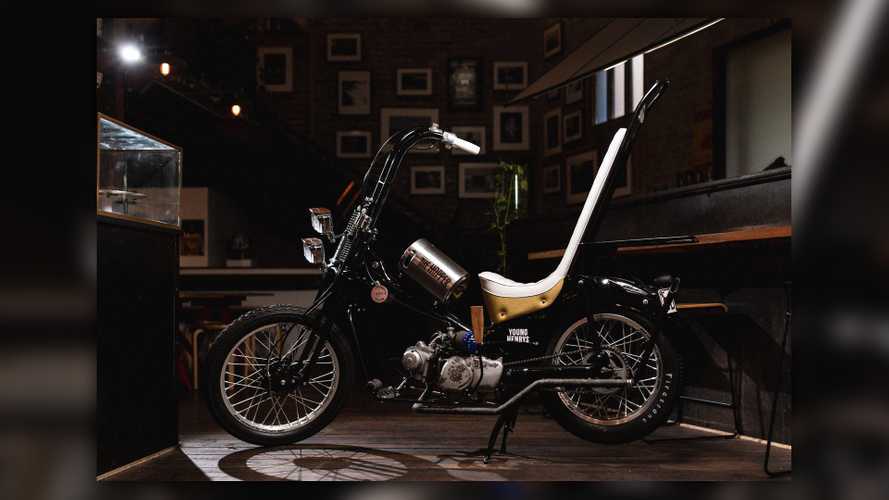 The most Australian thing since Paul Hogan.

You know what's awesome? Motorbikes. You know what else is awesome? Beer. Now, what if someone, say a pack of extremely talented wrenches from Down Under, combined the two in one gorgeous and delicious package? How awesome would that be? As awesome as The Hopper, Rising Sun Workshop's beer slinging old-school Honda CT110 chopper.

More From Down Undah:

Sydney to London on a Wing and a Prayer

About a million years ago, the Australian Post bought tons of tiny, mighty, Honda CT110s, modified them for postal duties, and the legendary Postie Bike was born. For those of you who aren't familiar, the CT110 is a pocket-sized, small-displacement dual sport that rocks a 105cc air-cooled single mated to a semi-auto four-speed trans with a centrifugal clutch. They're damn near bulletproof and, after a thirty-some year run in worldwide production, are common as dirt in places not called America. They can be had for pennies at government surplus auctions in Oz, and they are, in a word, perfect for small bike customization projects.

Speaking of weird customs, the guys at Rising Sun Workshop recently teamed up with best mates Young Henrys Brewing to build a rolling beer bar called The Hopper out of a CT110 and, whew, it may be the most perfect bike ever built. Basically a company calling card, The Hopper was designed to travel around to bars, bike shows, festivals, and other places where thirsty people gather to spread the gospel of hops. It features a built-in draft beer dispensing system, a rad sparkly vinyl seat made to look like the top of a glass of beer, and killer old-school chopper aesthetics. It rules.

So, how'd this all come together? Well, our colleagues over at Silodrome got on the horn with Brad from Rising Sun and here's what he had to say about it.

"We had a meeting at RSW, threw out some ideas on what we wanted it to look like, and took a lot of influences from the 70’s Easy Rider chopper scene. The bike had to have the ability to pour beer from it somehow. It had to be a rideable and registed bike, and had to be over the top.

From that meeting, I drew up a sketch of the bike, and then it was all built from that original sketch.

The biggest challenge on this build was time. We had members help on the build, and that was always going to be the case, but like everyone, life gets in the way, so building a custom bike takes a back seat. We had many delays with the bike, like motorcycle accidents, deadlines shifting, running a workshop, overseas holidays and as the collaboration was always about building an amazing bike on a small budget, the labor or build hours would just be put in whenever possible. It did mean a bunch of 16 hour days, but the end result speaks for itself.

I don’t know how many hours went into the build, but it is safe to say between everyone involved, with everything around the build, including filming social media short videos etc we would have hundreds and hundreds of hours in it."

I'll be honest with you all, my only complaint about The Hopper is that I can't go down to my friendly neighborhood Honda dealer and buy one off the floor right now. If you'd like to know more about The Hopper, or anything else about Rising Sun Workshop, check out Silodrome's full interview and mosey on over to RSW's website. If you happen to be in the greater Sydney area and you see this thing on the street, well, I'm not suggesting you snatch it and mail it to me here in the States, but...