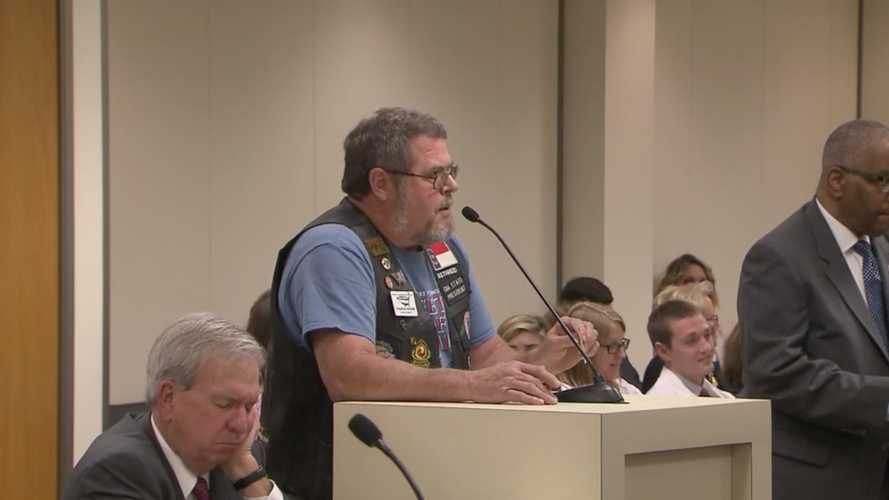 Riders take a stand against big helmet and its lobbyists in North Carolina.

A recent attempt to change North Carolina’s mandatory helmet law in the State’s House Health Committee has failed. House Bill 267, which was sponsored by Representative John Torbett, would have allowed riders 21-years of age or older to legally operate a motorcycle without a helmet. Under the Bill, wearing a helmet would remain mandatory for riders in their first year of getting licensed unless they take a "special course". Because, as anyone who has ever ridden a bike will tell you, you pretty much perfect the art of riding after 12 months or so of saddle time.

“It’s not a matter of wearing a helmet or not wearing a helmet,” began Representative Torbett, a long time motorcycle rider. “It’s a matter of ‘Does the State tell you to wear it or do they allow you to choose?' and I profess that the State should not tell you, but we should actively and aggressively let people choose to either wear a helmet or not wear a helmet, based on their own wants.”

The crux of Torbett’s argument was that there’s little evidence to show that States without helmet laws see more rider deaths, despite pretty much all statistical evidence pointing to the contrary. Torbett also inferred that if helmets saved lives, you wouldn’t see 30 other States without helmet laws on the books. One of the people on Torbett’s side of the aisle was Charlie Boone, the Legislative Director for the Concerned Bikers Association (an ABATE affiliate). Boone went on to argue that there are thousands more head injuries and deaths in auto accidents every year, so if the committee cares so much about safety, why doesn’t it push for car drivers to wear helmets too? Check and mate.

On the side opposing the bill were a handful of high-ranking medical experts/professionals who emailed Representatives to weigh in on the issue, including Academic Chief Resident for Physical Medicine and Rehabilitation at Carolinas Medical Center in Charlotte, North Carolina, Kendall Held, who attended the hearing and gave his two cents.

“By the nature of my position, I’m intimately aware of the consequences that a motorcycle injury can cause,” stated Held, who was joined at the hearing by a slew of his colleagues. “Not only to the (injured) rider, but the family, their friends, and the State of North Carolina. Traumatic brain injury can affect more than just the rider. Riders with severe injuries often cannot physically care for themselves and must completely rely on others to care for them. Unfortunately this is often a life-long, 24/7 job..."

Several officials opposing the Bill, such as Representatives Ray Russell and Deb Butler, pointed to a powerful set of facts and figures from studies conducted by various (unbiased) entities including UNC Chapel Hill, as well as facts from a safety memorandum from the US Department of Transportation. While numbers can vary from agency to agency, as booth Boone and Torbett pointed out, they all blatantly point in the same direction, suggesting the same thing: helmets save lives, period. And that's not mentioning the monetary aspect, which, according to studies, suggests an extra $25M in healthcare costs could be saved if everyone just wore helmets. It’s probably also worth noting that it was only two-weeks-ago that three riders were killed in a 36-hour period in Horry County, South Carolina, which is a State that does not have mandatory helmet laws on the books.

Representative Butler also raised the point that, despite what Torbett was arguing, the impact of helmet laws transcend beyond bikers. “This is a Bill not only affecting motorcycle riders, it affects all of us who drive. We hit someone who has a helmet on and they suffer a minor injury, and then the next time you hit someone accidentally who doesn’t have a helmet, and you have a catastrophic injury.”

RideApart also reached out to Representative Russell for comment on House Bill 267. “The US Centers for Disease Control and Prevention says, ‘The single most effective way for States to save lives and save money is a universal helmet law’ and helmet laws save over 1,800 lives each year. I could not support anything less for North Carolina motorcyclists.”