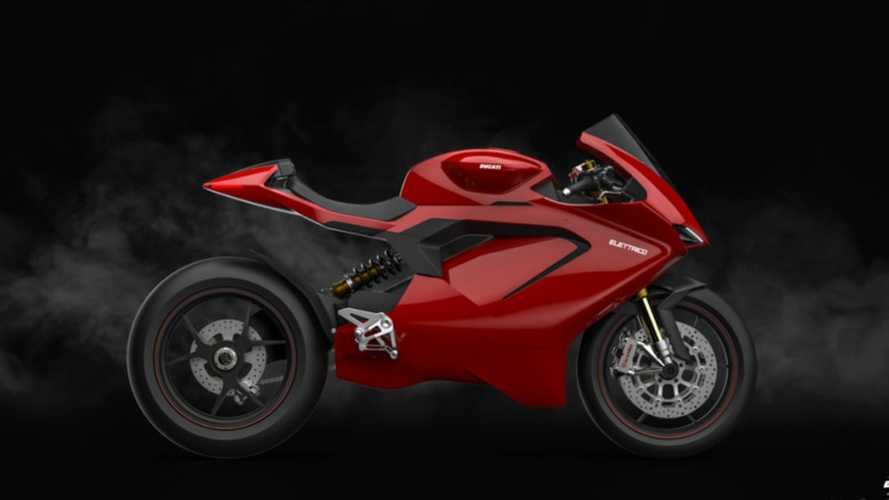 This, though? This isn't it.

The electric motorcycle revolution continues, though the large motorcycle manufacturers seem to be behind the curve. Everyone is waiting impatiently for Ducati’s entree into the segment. When rumors were popping and then fulfilled with a Chinese scooter, well, there was disappointment, to say the least.

The CEO of Ducati, Claudio Domenicali,  has said that “the future is electric” so there is no doubt that we’ll see a proper electric motorcycle with the Ducati logo on it. Some day.

Some folks out there do not want to wait, though, and so an “aspiring” automotive designer by the name of Aritra Das has mocked up some renderings of what we all probably want that new electric Ducati to look like. Panigale? Absolutely. Electric Panigale? Hold us all back. These renderings seem to simply be... barely-photoshopped images of a Panigale. OK, we’ll take the vents out of the side fairings because big flat batteries. That’s… not really how any of this works but, fine, we’ll run with it.

While these images are in fact an artist’s rendering and, as far as we can tell, in no way connected to Ducati or any kind of an actual prediction of what Ducati’s electric motorcycles will eventually look like, we can dream. So many of the newest members of the electric motorcycle market are uninteresting at best and ugly at worst (not you, Energica, you just keep on with your gorgeous self), the yearning for a beautiful Italian electric offering is strong. Please, Ducati, make something pretty. That scooter you’ve just introduced? That is not Ducati pretty. I mean, it might not be first-gen Multistrada ugly, but it’s no showstopper. Generally the enormous, flat, squarish battery pack that’s integral to the workings of an electric motorcycle is crammed into the frame where an internal combustion engine traditionally sits, and the absolute lack of any mechanical workings makes that surface flat and absolutely boring. It’s begging to be coated in pretty plastics, but that is tough to do without making things look blobby.

This collection of artist’s renderings have been picked up by some media and run as a tease. Don’t let it fool you. If Ducati is planning on a real electric motorcycle (and beyond Domencali’s electric-future proclamation, this scooter is all we have), we’re going to pounce on it faster than your cat on that moth you just let into the house. I have faith that Ducati’s designers can come up with something really lovely. Eventually.