Weekend WTF: I Have An Obsession With Tuk-Tuks 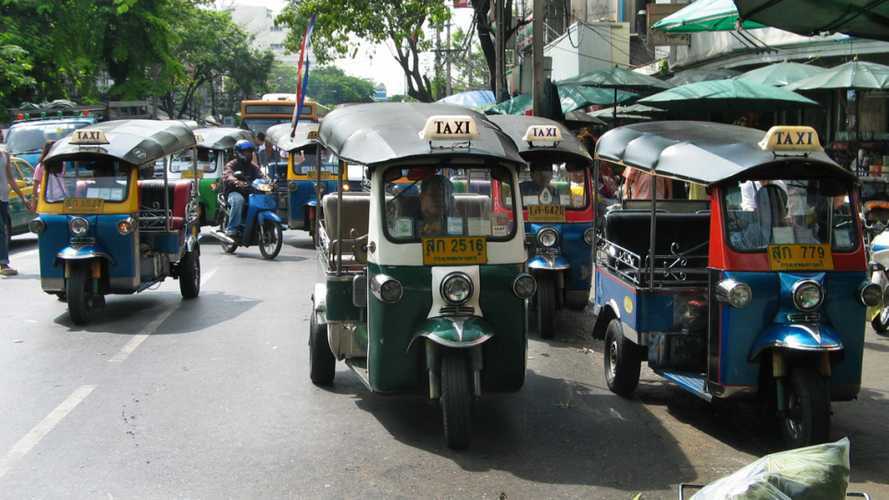 They look silly and impractical and extremely dangerous and I love them.

It all started when I saw a YouTube video of a chase from the Thai movie Ong-Bak, sped up and the soundtrack replaced by Yakety Sax (known to most as the Benny Hill theme). It featured these tiny little taxi cabs, three-wheelers operated by motorcycle controls sort of, crashing left and right similar to Top Gear's Reliant Robin segment. They looked silly, slow, impractical, and extremely dangerous. It was love at first sight.

The eTuk: Will It Work In The US?

The tuk-tuk, also known as a rickshaw, is an evolution of the traditional rickshaw, a seat on wheels pulled by a man. As with most things that go, the man has been replaced by a motor, and the operator now guides the vehicle's journey with a set of handlebars very much like the controls of a motorcycle. Today they are used all over the world but are most popular in Asia and Africa.

As with the original concept, and as featured in the Ong-Bak chase, tuk-tuks are most commonly used as taxis. With their open sides, canvas roofs, and seats on top of the engine compartment, this seems like an extremely unrefined ride, quite the opposite of the Toyota Prius cabs that have become ubiquitous today. They are also tall and narrow, making them particularly prone to tipping over, which the chase scene also demonstrates to great effect.

I can't explain why I love them so much. They're like a motorcycle made just barely practical enough for everyday use. I know, many people ride every day regardless, but the weather isn't a factor because of the roof, and it's much easier to take passengers or cargo in a tuk-tuk than on a traditional motorcycle.

There have been some attempts to produce a fully modern vehicle based on the tuk-tuk. The eTuk takes its name and design from the classic tuk-tuk. The Arcimoto FUV is the same basic concept, but with two wheels in front for better stability, and its large battery at the bottom of the machine to optimize stability. For each of these vehicles, however, we have to ask, will they work in the US?

In my opinion, probably not, for many of the same reasons you don't see tuk-tuks here. They're cool and all, but for the average American, they're the answer to a question nobody asked. Why expose yourself like that when you can be comfortable and cocooned in a common cab? But for me, I like motorcycles. I also like cars. I love the melding of the two ideas into one vehicle that can serve both purposes. It may not do it particularly well, but who cares? They're cute. They look like a riot to... drive? ride? I'm not sure. Either way, I'd love to get my hands on one to try out.