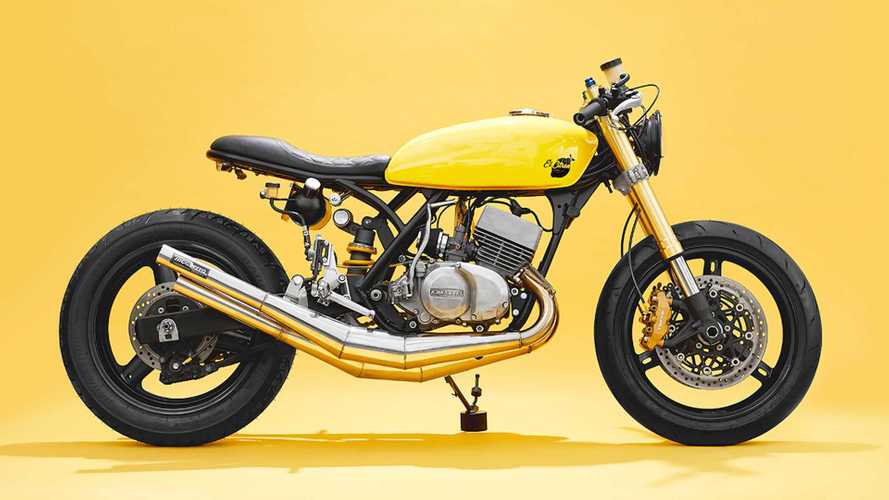 The Toronto-based builder brings the potent ‘70s triple into the modern era.

Kawasaki’s range of 1970’s two-stroke triples were—and still are—beasts of motorcycles. The potent three-bangers quickly and deservedly earned their “widow-maker” moniker, with even the smaller displacement machines in the lineup still packing quite a punch. Unfortunately, while engine development had allowed for an almost objectively irresponsible amount of oomph, chassis, suspension, and brake technology hadn’t progressed at the same rate.

With this in mind, Brian Kates of Toronto’s Motobrix decided he’d give one of the iconic triples the contemporary café treatment, complete with modern running gear capable of accommodating the iconic oil burner’s grunt. Entitled, “El Citron”, this stripped down custom began life as a 1974 Kawasaki S3 Mach II 400. The machine was stripped down to the engine and frame, which, aside from the tank, are essentially the only remaining stock components.

The factory forks were jettisoned to make room for a complete (inverted) front-end off a recent-model GSX-R600—complete with dual discs bit by Tokico calipers, clip-ons, and switchgear—while the stock swing-arm was binned in favor of a Suzuki Bandit 600 unit paired with a Gixxer 1K shock. The back end of the chassis was lopped off to make space for a new dedicated subframe, and customized brackets were fabbed up in order to accept a set of rear-sets off an SV650. The ’74 scoot now appropriately rides along on a set of triple arm rims shod in sport rubber.

The 42hp air-cooled, two-stroke triple was sent off to various experts to have its internals upgraded and refreshed; crank rebalanced, cylinders refurbished and bored out 1mm and given forged Wossner pistons, plus a rebuilt oil-pump. Next the triple was given a set of beautiful Higgspeed expansion chambers in the traditional Kawa triple exhaust layout (two on the right, one of the left).

Other additions include LED lighting throughout, a handful of additional custom brackets, compact Shorai lithium ion battery, a smattering of unspecified eBay parts, Koso instrumentation, a professional paint job, and a seriously rad one-off oil-tank housed under the seat. Putting aside the issue of whether or not it should be considered sacrilegious to cut up one of these prized vintage Japanese triples, we think Kates did a stellar job bringing the 1970’s runner into the 21st century while still retaining much of what made the donor so special in the first place.