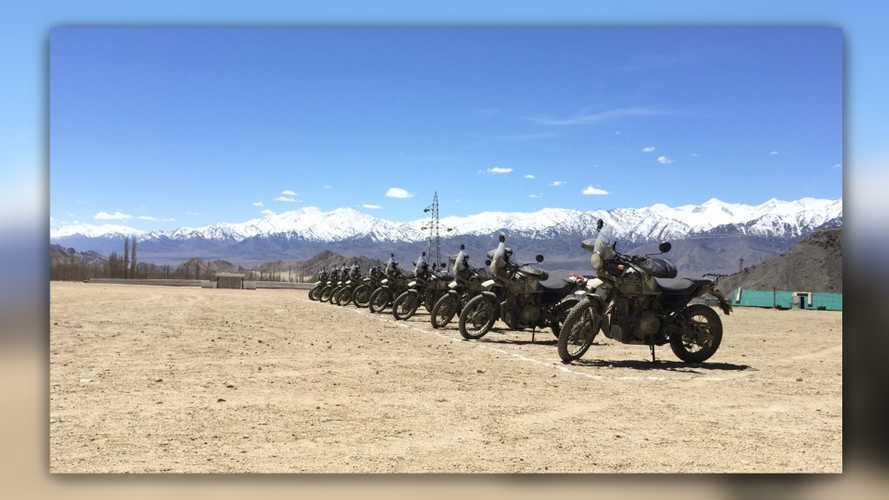 To boldly go where no bike has gone before.

After an adventure like this one, Royal Enfield won't have to prove the Himalayan's worth. The company teamed up with the Indian Army and the Himalayan Motorsport Association to assemble a group of eleven riders to take on the dreaded Karakoram Pass, the third highest mountain pass in the world. No motorcyclist had ever attempted the feat before. Eleven of them can now brag to have achieved it.

It Needs No Introduction:

The Karakoram Range is a chain of mountains that spans the borders of Pakistan, India, and China. It is the second highest mountain range in the world, superseded only by the Himalayans. Its highest peak, the K2, is only roughly 800 feet shorter than the Everest. At 18,000 feet, the Karakoram Pass has built a reputation as a historically important trade route and was once part of the famous Silk Road. Nowadays, the pass is closed to the public, which makes this a very rare and unique endeavor.

The terrain up in the mountains is unforgiving and the weather can be moody and brutal, especially in the winter. That didn’t deter eleven cherry-picked riders from tackling the 14-day, 700 mile journey through the pass. The event was organized to commemorate Kargil Vijay Diwas, an important military operation whose success ended the Kargil war.

The selected participants underwent rigorous alpine training and faced a 1,400 mile bike trek in the snow to prepare for the adventure. All eleven riders straddled a fleet of Royal Enfield Himalayans, equipped with heated grips, hand muffs, and studded tires.

On April 20, all eleven riders arrived in Leh unharmed, successfully completing their journey. They explained how they had to face feet of snow, slush, and ice, through which they had to push and maneuvre the bikes—a physically-demanding task, at an altitude of 18k feet, where oxygen levels are much lower. They’ve also had to deal with temperatures a low as -22°F. As for the bikes? According to all the reports, except for a few minor things including the occasional flat, all of the bikes soldiered through the entire trek without as much as a cough.

Think about it: only eleven people in the entire world have the bragging rights for crossing the world’s third highest mountain pass on a motorcycle and that motorcycle was a Royal Enfield Himalayan. If that’s not great exposure, I don’t know what is.