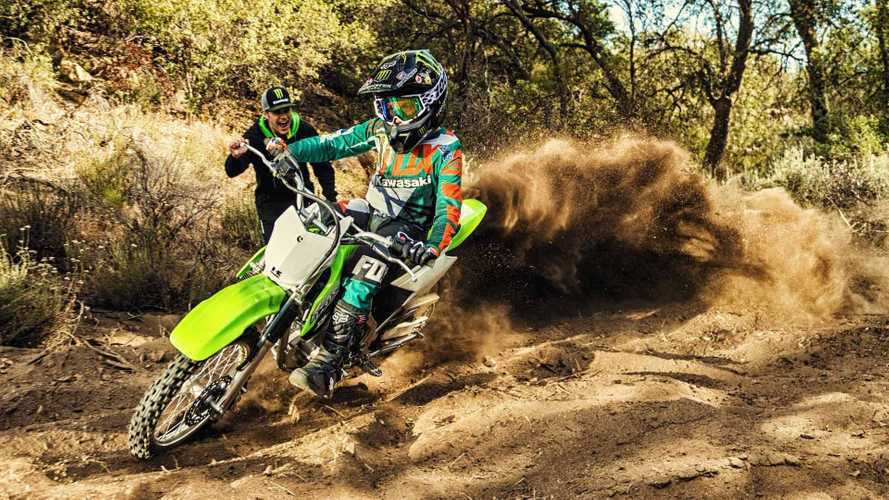 Guess who's got a green sticker?

Though major manufacturers do their best to keep their ongoing projects under wraps, red tape and legal requirements often mean patent and emissions filings tip the companies' hand, giving us outsiders a glimpse at what’s happening behind closed doors. And the most recent victim of this inadvertent early product reveal is none other than Kawasaki Heavy Industries, which was recently issued an executive order from the California Air Resources Board (better known simply as “CARB”), granting the upcoming 2020 KLX dirtbike the coveted green sticker.

Pit Bike Racing On A Go-Kart Track Looks So Fun

With the green sticker, the near-quarter-liter KLX is permitted to ride OHV (off-highway vehicle) trails and parks year-round, unlike the 230cc competitors from Honda and Yamaha. Further separating it from the rivals’ offerings is the addition of fuel-injection. This gives the KLX a serious leg-up on the competition, considering when you Google “TTR-230”, the first suggested result is “TTR-230 carburetor problem”.

Unfortunately, aside from the CARB filing telling us the 230 will make 20.1hp, the document gives us little else to go on. Our colleagues over at Indonesian Website MotorPlus-Online recently leaked photos of Kawa’s new 230, though like the CARB filings, info gleaned was incredibly scant. We can see that Team Green has tacked an “R” onto the end of the KLX230-moniker. This wouldn’t be the first R-spec KLX, though we are curious to see whether the addition of the letter will denote any important features, or if it’s more of the same moto marketing concept of “Add an ‘R’ to the name and it well sound race-oriented”.

With the news breaking through CARB and not an official press release, we obviously don’t have any info on release date or price. We’ll be sure to pass on the intel as it comes in.