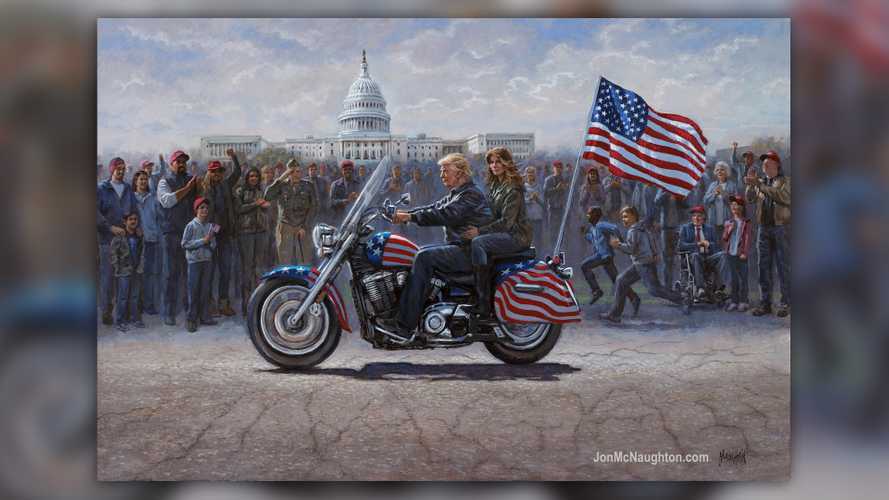 You all ever heard of a guy named Jon McNaughton? If you haven't, you're not missing much. If you have, you know he's a lunatic who calls himself "America's Painter" and paints hysterical (in the classical "hysteria" sense), Bosch-like pictures of the dystopian, nightmare-dimension America where he apparently lives. It's always these weird, apocalyptic, warm-tone images of, like, the former president treading on the constitution while strong men weep behind him and the ghost of George Washington pleads with him to stop. His work is bonkers you guys.

So, why am I bringing this up? Well, America's Painter dropped his latest painting of the current president and, whew lad, it's every bit as weird and crazy as you might imagine. Before we get started let's make one thing crystal clear, this isn't a political opinion piece. This is an art critique opinion piece! Got it? Good. Now, let's dig in.

Called "MAGA Ride", this painting portrays the president and first lady riding a very patriotic motorcycle past a crowd of redhats standing in front of the U.S. Capitol Building. That sentence there doesn't do the painting, which you can see attached up above, any justice at all. I can't describe the Lovecraftian madness of McNaughton's paintings. You have to see them to appreciate them. So, take a moment to gaze into the abyss up above and pay close attention to the bike. Good?

Now, McNaughton has some very, shall we say, strong opinions about God and Country. In fact, he loves America so much that he's in a state of constant fear about its future. You can tell just by looking at his work how worried he is and what, exactly, he's worried about. I won't belabor that point, though. What I will belabor is the fact that this painting is unintentionally hilarious due to one important detail—that's totally not an American motorcycle!

Look at it! Look closely at the engine, at the primary cover, at the transmission, and at the shape of the panniers. That is clearly a Japanese bike. Which one, though? Our man Bryan thinks it's a Yamaha Raider all dressed up for touring. I think it's a Honda Shadow ACE Tourer and both Justin and Kate back me up on that. Sophia has no opinion either way, but she's pretty sure that putting all that Americana on a Japanese bike (one that's made in Ohio and is as American as Harley, by the way) is both hilarious and ironic. Sabrina had a good, long look but started bleeding from the eyes and had to take the rest of the afternoon off.

Now, remember, this painting was made in absolute earnest. McNaughton is not a man who deals in subtext and the fact that the president is on what is clearly a Japanese bike isn't some funny ironic commentary on the artist's part. This is not a joke, this is the real deal. Why is he on a Japanese bike, though?

All joking and pettiness aside, McNaughton is an accomplished and professional painter who, I assume, knows about things like research and using models. Why did he put a man who is, in his opinion, the most American president and the country's only hope to return to Godly traditions on something other than a Harley or an Indian? What, in the actual heck, is going on here?

"Trump is maneuvering his way through a corrupt Washington DC, despite the constant bumps and detours imposed upon him," McNaughton said about the painting on Twitter. I, uh, I don't see any bumps or detours in this here painting, Jon. Also, if this ride is so bumpy and dangerous and full of detours, why aren't the president and first lady not wearing any gear? I don't think the Secret Service would be cool with that, my dude.

Seriously, none of this makes sense. Like, the painting is fine from a technical standpoint but the message is muddled. Why a Japanese bike? Was that a mistake or not? If it was a mistake, how could a professional painter get so close to his mark while still missing it by a mile? The mind boggles. The whole thing from the color palette to the composition to the bike to the walleyed crowd of rapt redhats is just so dire. It's not Ramierez or Garrisson bad, more like Thomas Kinkaid bad, but it still sucks. I give it a D—it's technically competent but he seems to have no idea what he's talking about.