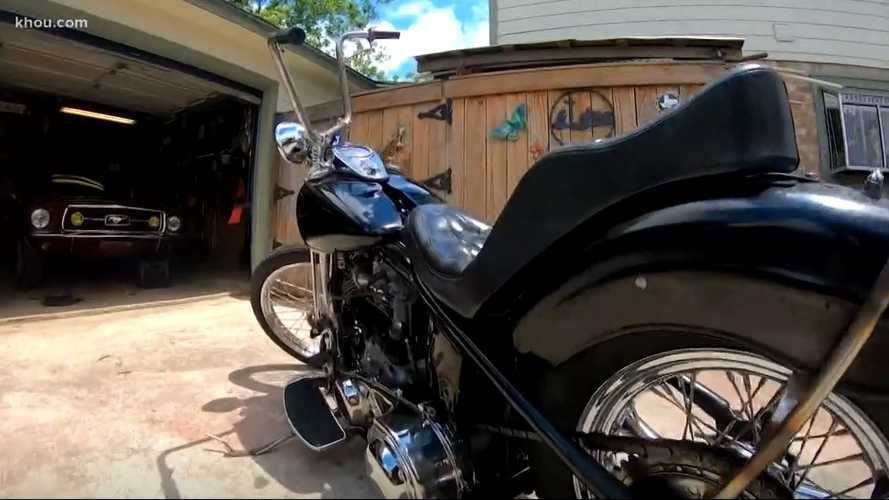 Whenever we are a victim of theft, we tend to hold out some hope that perhaps our stuff can be recovered. More often than not, our hopes are in vain, and our stuff is never recovered. Those of us who have gone through this can relate to frustrating interactions with police, who seem to give up immediately on putting any effort into recovering stolen goods.

Motorcycle Thief Gets His Due

That’s why this story is an unusual one: not just that a stolen motorcycle is recovered, but that it took forty eight years to do so. The 1957 Harley-Davidson panhead motorcycle was stolen from owner Delroy Sims who lived on the east side of Houston, Texas some time in 1963. At the time it was still a relatively new machine.

Not only is it nearly a miracle that the bike was recovered, but the fact that it’s in good shape and running adds mystery to the miracle. The world may never know the story here and it’s kind of killing me. Who stole it, and where has it been living this whole time? Did the most recent buyer know it was stolen? Did they lose whatever money they spent on it? How did it come to be identified as stolen, and what kind of proof did the son of the original owner have, that this was in fact his father’s motorcycle?

The original owner, sadly, did not live to see the motorcycle that he had apparently spent his life’s savings on, recovered from its theft. The bike was restored to his family, though, and his son has taken possession of the bike, which is now a classic. The great news about this is, the current (actual) owner isn’t going to turn around and sell his dad’s recently-reacquired classic. Delroy Sims’ son Darrell says the bike helps him feel closer to his dad, and that he’s going to restore the bike to what it looked like when his dad owned it.

Hopefully whomever purchased the stolen bike is at least heartwarmed that the motorcycle is treated as an heirloom, and not a windfall, for this family.