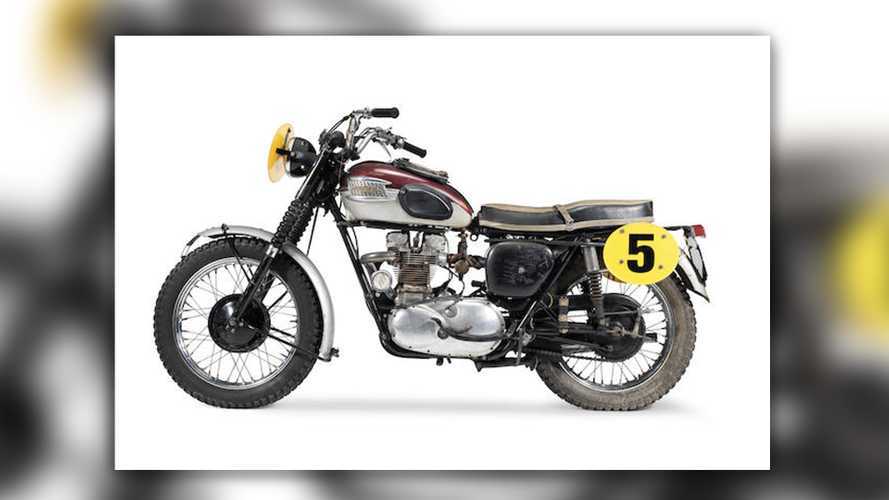 A rare Trophy to behold.

A lot can be said about Steve McQueen and his unparalleled legacy of movies and motorsports. The guy was fearless and he has left us some of the greatest car and motorcycle chases in movie history. Which such as firecracker, it is to be expected that his entourage was equally as adrenaline junky and awesome as he was. It’s the case of McQueen stunt guy himself, James Sherwin “Bud” Ekins who not only took the falls, but was also an accomplished motorcycle racer.

Collection of Steve McQueen Bikes Gets over $300k at Auction

As a bike aficionado, we were bound to see a bike associated to his name pop up at some point. McQueen’s Bullitt and The Great Escape stunt double and good friend Ekins was also a successful racer. He won a number of events including the 1955 Catalina Grand Prix, several editions of the Big Bear Hare & Hound desert race and when he wasn’t busy stunting and racing, he ran a Hollywood Triumph dealership.

The story of this particular Triumph is a little wacky. While shooting The Great Escape in Germany for which he performed McQueen’s famous bike jump, Ekins decided to enter the International Six Days' Trial then taking place in Garmisch Partenkirchen, also in Germany. For the occasion, Triumph shipped him a prepped bike, a shiny new 1962 Triumph TR6SS Trophy. Ekins went on to win the ISDT on his Trophy before shipping the bike to his home in California.

The bike changed hands during the 80s, when Bud Ekins started sending British bikes consignments to his partner in England. The Trophy landed in one of the batches, which the partner sold to a good friend of his in 1989 to add to his ISDT memorabilia collections. The bike was shipped alongside its California license plate as well as poster of the 1962 ISDT and the trophy he won.

The extremely rare Triumph—produced only in 1962—has now showed up in a Bonhams listing and will be up for auction on April 27 at the SpringStafford Sale with, of course, the poster and trophy as well as pictures of Ekins in action at the ISDT. The 57-year-old bike only has 4,478 miles to the counter and looks to be in gorgeous condition. What a sight! Considering how exclusive the model is (both because of the short production run and the fact that it won a race with Bud Ekins in the saddle), the Trophy is expected to fetch a pretty penny.