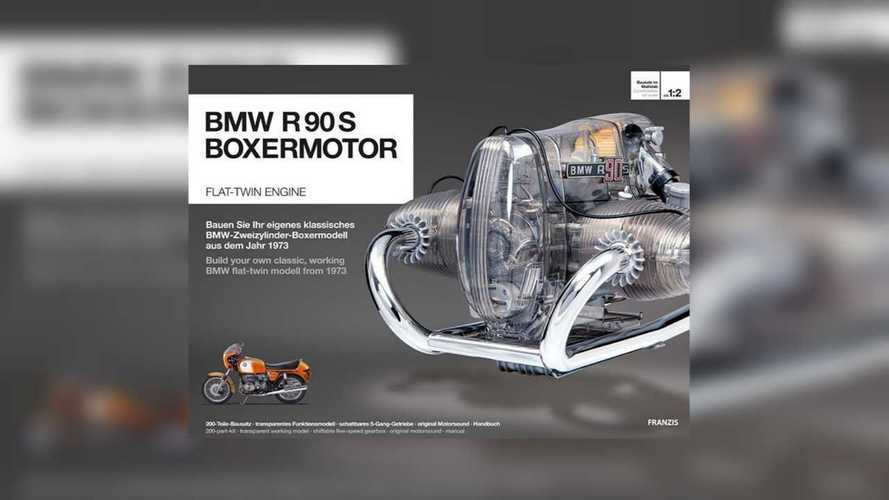 Well OK, it's plastic and won't power a motorcycle but it's still cool.

The BMW R90S changed the motorcycle industry. This bike, first released in 1973, was one of those models that upended everything everyone thought they knew about motorcycles up to that point. There’s a case to be made that it was the first true sport tourer.

If you can’t afford the real thing, here’s a replica of the air-cooled boxer-twin engine used in the bikes. It’s half scale, so not too tiny, and you’ll have to assemble it yourself. The very cool thing is, the engine case is made of clear plastic. You can, in fact, turn the engine over and watch exactly what happens inside when you do so. It has a “true to detail five speed gearbox” and might be almost as much fun to put together as a real engine! Certainly a fun thing to do on a rainy or snowy weekend. The 200-piece kit comes with a 120-page instruction manual, which seems to be both in German and in English so translation won’t be a problem.

Now the R90S is a classic, and its style has been often mimicked by other manufacturers in all of the intervening 46 years. BMW itself has installed echoes of the R90S in its new R nine T racer, cafe fairing and all, and it remains a beautiful style in all of its incarnations and copycat renditions, every single one of these forty six years later.

If you’ve ridden an older BMW boxer-powered motorcycle, the ones they call “airheads” to distinguish them from the later, oil-cooled “oilhead” motors, you will know why they are often called a “gentleman’s machine.” There is a kind of perfect composure in the way those airheads run. Those familiar can immediately identify the pop-pop-pop of the old machines rolling lazily along the asphalt. Those who have experience riding them will tell you that there’s a distinct skill to diddling those Dell’Orto carburettors just right for a successful cold start, preloading the shifter just so before an upshift, and knowing what can and what cannot be accomplished with the brakes on a stock machine. All of this combines into a slightly needy but really lovable character and results in things like scale models, copycats, and fully functioning small-scale plastic kit engines.

When it was new the R90S was head and shoulders more expensive than anything else available, but the old airhead motors seem to be defying age and even today, there are a ton of them on the road. I suppose they were worth the premium. Price an original R90S today and you’ll agree. The model engine isn’t cheap, but at least you won’t need to put much maintenance into it.