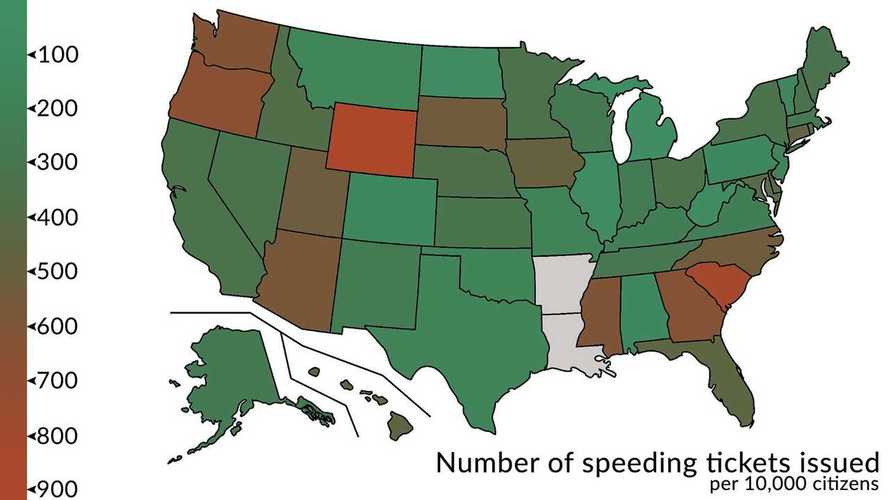 The numbers are in!

We always try to find patterns when it comes to being pulled over. Is it entirely random or are there factors that weigh in the balance? The type of bike you’re riding on, its color maybe? Or maybe it has something to do with riding alone versus in a group? You’d be hard pressed to find a functioning algorithm to answer that question. A New York-based Honda dealer decided to have a look at the most recent data when it comes to speeding tickets. While you might or might not get away with busting the speed limit, it seems like some states are likely to go harder on you than others.

Yonkers Honda attempted to have a look at the places across the country you are more and less likely to get pulled over for a speeding ticket. The team managed to get data from 48 of the 50 states, commenting that Louisiana and Arkansas proved to be too elusive). They then compiled the total number of tickets handed out in each state from the most recent year on record, as well as the number of tickets issued per 10,000 citizens—which is the data we’re interested in.

Obviously, California stood out with the highest volume of tickets issued with over 1M handed in 2017, however pro rated to the population, it turns out that at 330 tickets per 10k people. It didn’t even make the top 10 list of states that issue the most tickets per capita.

That honor surprisingly goes to Wyoming. With an average of 903 tickets per 10k people issued in 2017, for a total of over 42,000 for the year, the state ranks first in the number of ticket per capita. A quick math tells us that roughly one out of eleven citizens have received a fine for speeding. Wyoming is followed closely by South Carolina and Oregon.

The big winner of speeding ticket pool is Michigan with only 70 tickets issued per 10,000 citizens while the state that has issued the least tickets in total was North Dakota in 2016 with 4,512 statements for the entire year. Looks like people on the northern West Coast and southern East Coast better keep their speed in check!