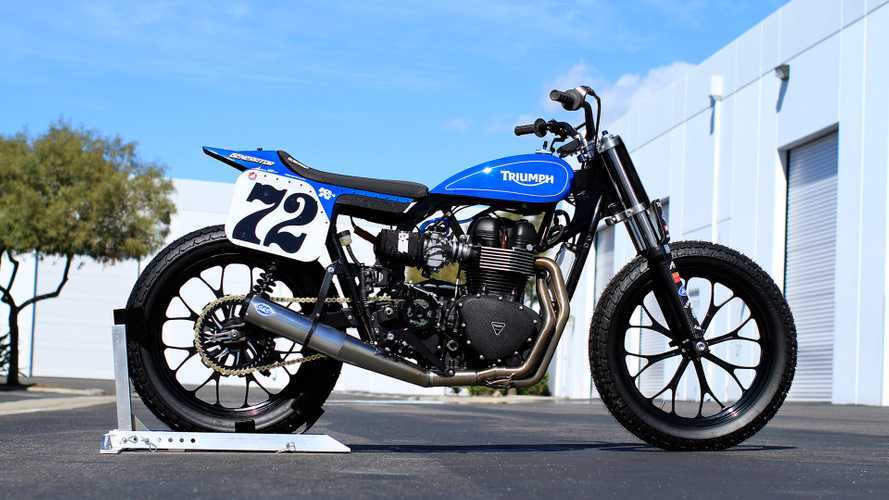 A vision in black and blue.

Thanks to such cool-looking models as the Indian FTR 1200 and the Husqvarna Svartpilen 701, flat track racing is getting more exposure nowadays than it has in recent years. The trend hasn’t quite caught on, however, and unlike the naked vintage styling everyone is doing, only a few bold ones have tried something a little different. That’s where custom designs come in handy—you can virtually turn any bike into anything you like. Your only limits are your imagination and your wallet. For Super Hooligan racer Paul Hartman, flat track racing came in the shape of a Brit we all know well.

Hartman had wrecked his race Harley-Davidson at a previous hill climb event and was looking to build a new Super Hooligan-specced ride. Regulations for the Super Hooligan series are pretty straightforward: the frame and engine of the bike have to come from a stock model; the mill has to be 750cc or more.

Instead of opting for another H-D Sportster, Hartman decided to do something a little different and found the perfect bike to make it happen: the Triumph Bonneville. He explained that though the Harley is the staple Hooligan racing bike, it is also pretty heavy, has a long wheelbase, and has a bit of a steep rake angle. The Bonneville solved these issues, weighing in at 451 lb and coming in at two inches shorter than the Sportster.

He started with the frame of a 2006 Bonnie as well as the 865cc mill of the T100. Including the ECU, these are the only three genuine Triumph parts used in his build—the rest are all race-spec components. He sourced a lightweight Antigravity  Lithium battery to help keep the pounds low. The exhaust system is an S&S flat track set up with K&N filters while the rear brake comes from the Indian FTR 750. The wheels are striking y-spoke black anodized rims from Performance Machine.

It took Hartman three months of hard work to complete his build and the result looks pretty darn cool. The bright blue nicely contrasts the blacked out components. Hartman has since had a chance to take his Super Hooligan Bonneville out for a spin and he feels pretty confident the bike has the makings of a winner. I mean, a flat-track, race-spec Bonneville sounds like a sweet deal to me.