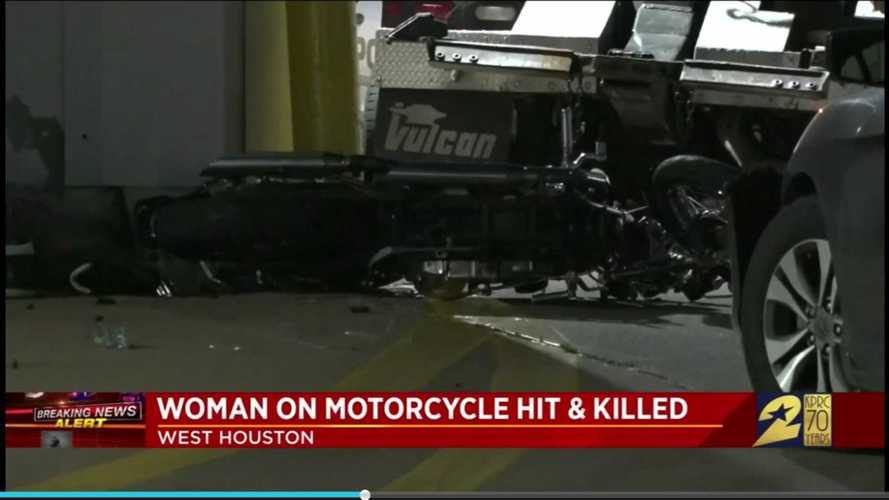 Splitting lanes is not a crime punishable by death.

This is all our nightmares come true. An apparent road rage incident leaves a 33-year-old Houston, Texas motorcyclist dead behind a grocery store. We won't get to hear her side of the story.

If you have, like I have, spent all your riding years paying close attention to how mainstream journalists report on and write about motorcycle crashes, you’ll notice the same trends here. The motorcyclist is always the one doing the hitting, and the one in the wrong. Here, at least, the driver of the car who ran her over has been arrested and charged with manslaughter.

I can imagine how this went down, and it’s something any of us would do. Perhaps the rider was stuck in traffic and attempted to go around some cars, even though lane splitting is illegal in Texas. This perhaps made some of the surrounding drivers pretty mad, because ‘Murica, and that ain’t fair. We’ve all been there. We’ve all seen the drivers around us get all red-mist, mad that we’ve gotten ahead of them, and I bet you have been chased simply because you passed one.

This is where it gets scary. The only information we have is that the rider made contact with one or two cars, and scraped the paint on her assailant’s Honda. It doesn’t seem as though she crashed, just that she made contact. The cars may have been trying to prevent her passage, and she was probably scared, and trying to get away.

It’s what any of us would do, right? Try to get away from the cars that are chasing you down, maybe by finding an open road or maybe by trying to zoom around the back of a grocery store. There’s some speculation that she pulled over to hide and remove her license plate (seriously?), but even if she did that, there’s an argument to be made that she didn’t want her assailants to identify her so easily.

The worst is the end: the rider fled around the back of a Kroger and the assailant used her car to knock the rider off her bike at about twenty miles an hour, and then, again with her car, the assailant pinned the rider, now off her bike, up against the outside wall of the building and/or ran her over (there are conflicting reports). The rider was pronounced dead at the hospital.

If you haven’t been riding very long, you’d say to yourself, "who does that?" Those of us who have been involved in road rage incidents and lived to tell the tale, well, we know that especially in traffic, people who don’t ride motorcycles are not so friendly to those of us who do.

Stay safe out there everyone. Remember that cars are large, heavy weapons and no matter what, when contact happens, we are the ones who lose. Rest in peace, young motorcyclist.