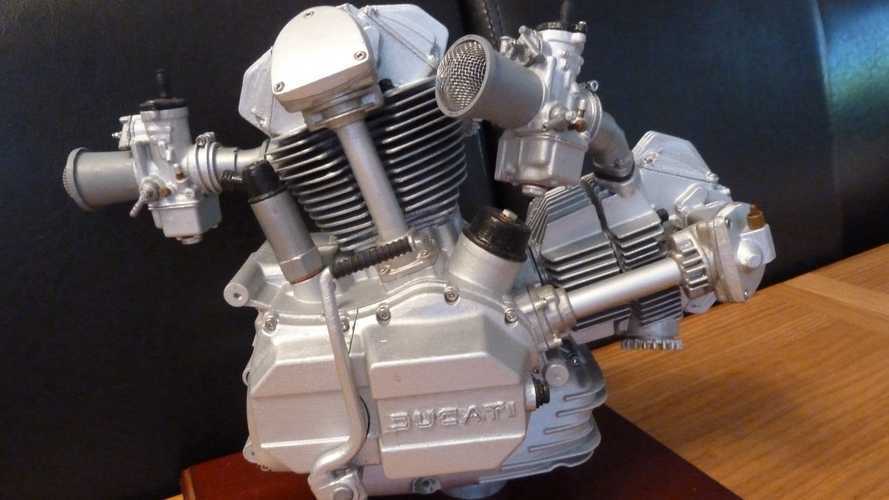 While at first glance it looks like the real thing yanked out of a frame and put on display like a rare jewel, it is in fact a 40% scale model of a Ducati “square case” bevel L-twin.

UPDATE: The Tiny Kawasakis are Here and They're Spectacular

The “square case” 863cc engine was developed in the mid 70s as an attempt to simplify the earlier “round case” engines on the Ducati 750s. The most well-regarded “square case” bevel engine was produced in 1978. These engines were stuffed into the likes of the 900SS, one of Ducati’s most famous and most iconic motorcycles. The nomenclature of the shape distinction is quite a lot like the boxer twin “airhead” vs “oilhead” vs “hexhead,” although in Ducatis, the name refers to the shape of the engine case, not the valve covers.

The model that is on display and up for sale comes out of a British shop called “Moto Miniatures.” This firm will make engines to order and has several on offer. If you visit their website you may find one you can’t live without.

This “square case” contains over 200 individual parts cast from resin with stainless steel fixings. It’s been made by hand, each piece individually cast; it is not a kit. It even includes the mesh over the air intakes as well as an extremely detailed pair of carburettors that are so true to the original Dell’Ortos you can practically smell the green gas. Heck, I’m getting agita just thinking about having to take them apart to tune, because something always cracks or there’s a rubber piece that’s NLA or those float needle faces are worn out…

I dare you, any of you who have been elbow-deep in an engine of this era, to look closely at this thing and tell me it doesn’t fool you, right down to the scratches on the holes where it looks as though it was once bolted to a frame. In person you’d be able to see that it is indeed mounted on a piece of wood and measures 12.5” x 8” x 10” which isn’t super tiny but it is small enough for your big executive desk. You might not be able to resist stuffing some rags into the header ports, or at least the one on the top cylinder.

I’m sort of dying to find the appropriate size wrench to put on the crank just to see if the engine makes the appropriate sucking noises when you turn it over. Plastic on plastic? Why not, it’ll be fine… now where’s top dead center…