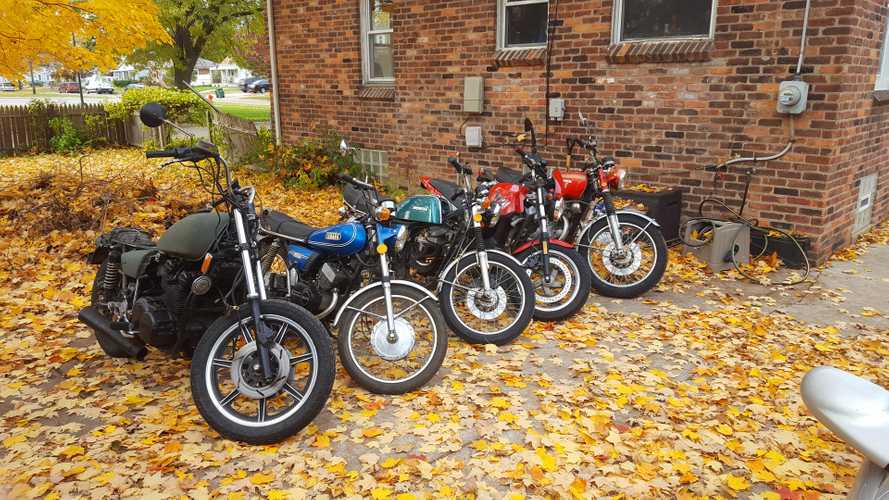 Hey friends! Spring has finally sprung and it's time for some riding. How are your bikes? Good? All ready to go for the season already? I wish I could say mine were, but it's been a winter of fits and starts here at the RideApart Small Bike Rescue garage. Remember all those bikes I picked up last fall? Well, they're all still here. There has been some good progress, though! Let's talk about what's good, what's not, and what's looking for a good home.

It's come a long way.

Remember this little guy? I picked up this '74 Honda CB200 for three Benjamins back in September of 2018. It was a parts bike I swore to bring back to life. Did I succeed? Well...

Eh? EH? After some fits and starts (and a partial top-end rebuild) the CB200 is a runner once more. I still need to dial the carbs in and do a little last fine tuning, but it's done. Sadly, it can't live here, so it'll be looking for a new home soon.

The grossest CB450 in the land.

This thing. After sitting forsaken and alone in a leaky barn for 16 years, I brought this old survivor home for the princely sum of $500. It's a mess, y'all. Cosmetically, it's in much worse shape than the CB200 was (corrosion and rust everywhere, a huge gob of congealed grease mixed with seeds, stones, nuts, and other detritus behind the chain cover, dirt and grass under the seat, etc.), but it's mechanically sound.

So far I've replaced the entire front brake system from the master cylinder to the rotor, replaced the circa 1977 Dunlop gold seals, replaced the points, coils, condenser, and plugs, gave it an oil change, and cleaned/rebuilt the carbs. It still has a ways to go, but if I don't run into any snags like the mangled head on the CB200, the CB450 should be on the road in the next couple weeks. Maybe. Probably.

My dream bike. If you recall, this bike started life as a '68 BSA A50 Royal Star but was reduced to its current sad state in a garage fire. Todd gave it to me for free, but as we know, there's no such thing as a free bike. Nothing much has changed on this one since I picked it up. I sourced a legit A65 Lightning mill from a local Britbike graybeard and made a checklist of things that need doing, but that's it. I better get on the stick too, 'cause I bet a buddy $100 that I'd have this thing on the road April 1, 2020 and I don't like losing bets.

I picked up this Buell Blast to fix and flip, but as soon as I brought it home my wife fell for it and, well, it lives at our house now. It's in good shape but, like all my bikes, it needs work. I started poking at it while waiting on parts for the CB450, and it's just a battery and an air filter from being back on the road.

The plan for this one is to just leave it stock and ride the wheels off it. It's perfect just the way it is and I can't wait to put some miles on it.

My poor triple, man. I took the Yamaha off the road back in October of 2017 for some much needed maintenance and a front end upgrade. Since then I got sidetracked with fleet bikes and projects and every day the triple sinks farther and farther down the priority list.

This year, though, this is the triple's year. The plan here is to replace the old Yamaha stock front end with one off an early-aughts R6—a super easy mod—a new paint job of royal blue and red with a Cobra logo, new tires, wrapped pipes, and (finally) an upholstered seat. Until then, though, it remains an extremely stylish parts shelf.

One of these days...

Ah, the RD200. I got this bike for free way back in TYooL 2002 and it is currently my longest-running project. Well, "project" is a really strong word for this bike. It hasn't run since the early-80s, has no carburetors, and I have no plan for it. All it really does is sit in my garage and collect dust but I can't bear to part with it.

The reason it has no carbs is that this bike was a one-year-only model and the carbs are specific to it and they're pretty much unobtainium at this point. If you can find a set they go for hilariously high prices, which I'm not willing to spend.  So, yeah. Until I can find those carbs it'll sit at the bottom of my projects list. That said, if you have a line on some RD200 carbs let me know.

There you go. The current state of the garage is pretty good! Once I get the Hondas out of here the BSA is on the block and I'll be detailing my work on it here. Until then, stay tuned.