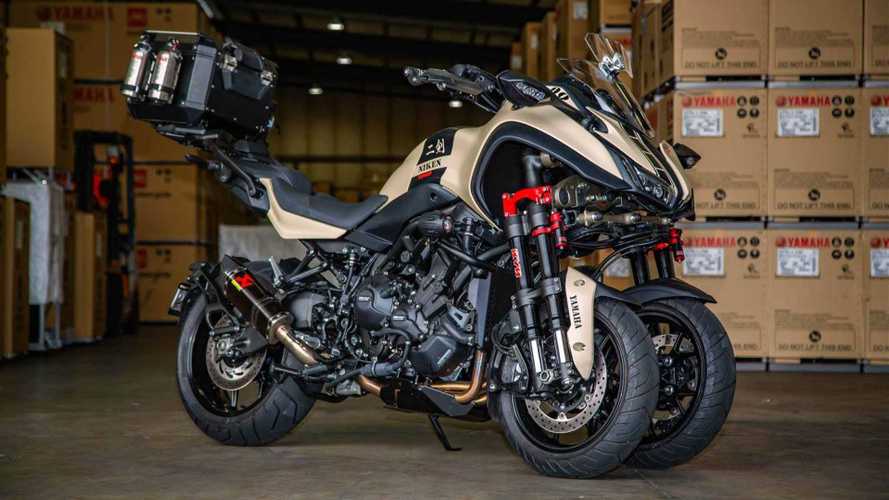 Leave it to the Aussies to put mad power into a mad ride.

It was only a matter of time until somebody hot-rodded the new Yamaha Niken. Yamaha Motorsports Australia recently shared a build by Trooper Lu's Garage of New South Wales that is believed to be the first turbo Niken in the world.

Details remain sparse on the specifics of this build, but the photos shared by Yamaha and Trooper Lu's provide some details. Most notable is the Garrett turbo mounted to the bottom of the bike, designed by Ben Shaw from Extreme Creations. Similar applications of this system have resulted in an increase of around 33 horsepower. Added to the Niken's stock 115 horsepower would put this bike around 148. Trooper Lu's says that Shaw "has knocked the turbo application out of the park. Like roll on throttle wheelies out of the park."

The custom color scheme is another significant change from the Niken's standard Yamaha blue. We can also see KYB forks, as well as a custom exhaust with an Akrapovic muffler. The large top box gives the turbo Niken some utility as well, kind of like a fast Niken GT.

The end result is something that looks quite different from your standard Niken, which itself looks quite different from any other bike on the road. Its desert tan color and square top box may visually hint at some adventure bike capabilities, but it's no more made for dirt than the standard model. Instead, it's optimized to take the standard Niken's already impressive capabilities and crank them up to 11. The build also shows that it is possible to customize and modify the Niken, despite its highly unusual design.

Trooper Lu's promises that "There will be a full list of work and review moving forward." We're looking forward to learning more about this bonkers build.