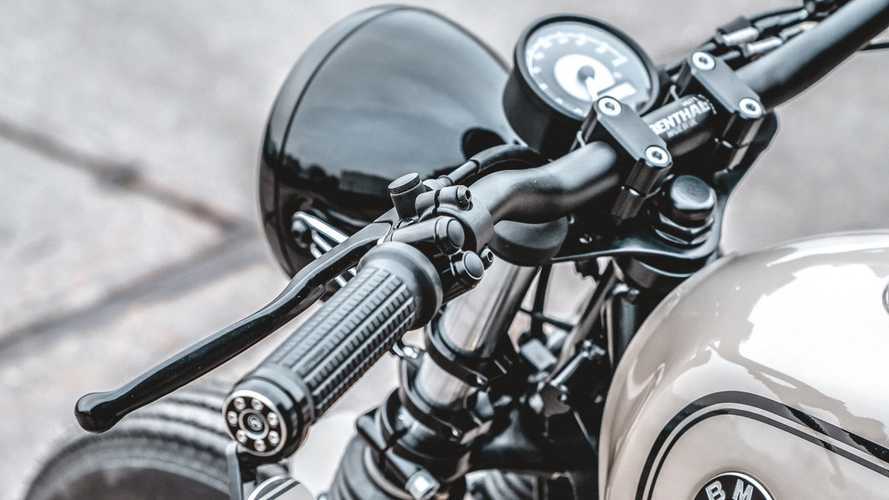 It looks rather delicious!

I love a good bobber, and Ironwood Customs out of the Netherlands has graced the world with this lovely BMW R80 bobber they’ve dubbed the “Latte Stormtrooper.” Though, I think if you’re going to call something a Stormtrooper, it definitely needs some Imperial insignia.

EVERYONE LOVES A CUSTOM R80

The skill involved in this creation is undeniable. The frame and engine are sort-of, mostly original, and the drive shaft remains along with the tank and front wheel, but everything on this bike has been sawed off, upgraded, replaced, repainted, powder coated, rewired, fabricated entirely or some combination thereof.

The tail end of the bike is the most striking upon first glance: that complete lack of rear subframe paired with the disc-covered rear wheel draws your eye. If you’re standing on the port side of the bike you’ll notice the Akrapovic exhaust can originally slated for an R nine T. All of the exhaust pipes leading up to that can are custom, as are the seat, clutch, bars and piston rings: all IronWood original customizations.

By way of the naming convention, the Dutch guy who runs Ironwood Customs, Arjan Van Den Boom, explains it thus: “We now have two Ironwood bike series: one is called ‘The Deathtstar Series’, and is based on R80 and R100 twin-shock bobbers with chunky tires. The second is ‘The Stormtrooper Series’, featuring R80 monoshocks with a higher stance and sporting vintage compound rubber.” The Latte, here, he says, is  “a Stormtrooper on steroids.” In which case shouldn’t it be white? Or … red? Wait, that’d be a Praetorian Guard, though, which is not a catchy name for a motorcycle. This is all much too deep into the Star Wars weeds, isn’t it.

At any rate Van Den Boom says “I guess you could say it’s a bike that’s had a dash of hot steamed milk,” by which he means the paint job? The tank, front fender and rear wheel are coated in Audi's “Mocha Latte”: that is the name of the color. Kind of makes me want to lick it, and no doubt that’s what they were going for with this build.

Still, some Imperial insignia on the bar ends, maybe, would top it all off, don’t you think?