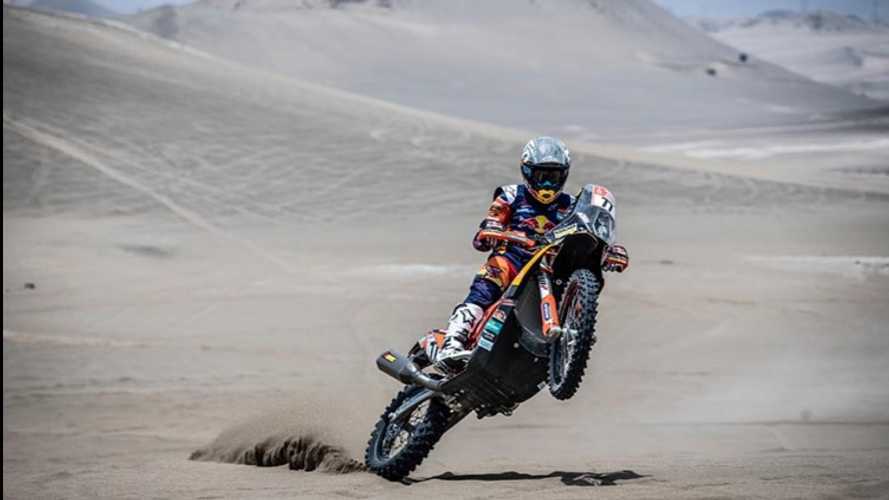 The Abu Dhabi Desert Challenge was born the UAE Desert Challenge back in 1991, and was rebranded in 2009 with a “five-day motorsport spectacular” through the desert. The Red Bull KTM Factory Racing Team, fresh out of their January participation in the Dakar Rally, will be travelling to Abu Dhabi to participate in the 29th annual event there.

The race in Abu Dhabi kicks off the FIM Cross-Country Rallies World Championship, which so far consists of the aforementioned Abu Dhabi race, the Silk Way Rally through Russia, Mongolia and China, the Atacama Desert Rally through Chile, and the Rally du Maroc, through Morocco.

Sam Sunderland, one of the riders on the Red Bull KTM Factory Racing Team, has been training for this event on his KTM 450 Rally bike and also participating in enduro and supercross events. Sunderland said, “I always look forward to Abu Dhabi, it’s somewhat of a home race for me. I feel confident in the dunes there and have had some success in the race before with a win in 2017. It’s going to be tough and we’ll have plenty of competition. ...Training went well in Morocco recently and it’s great to have the team working together again. My plan for the race is to do my best for the team and myself, hopefully, come away with a good result and get the championship off to the perfect start.”

Argentinian Luciano Benavides, a top-ten finisher overall in the 2019 Dakar, is also on the KTM team and came through Dakar uninjured and with a fantastic positive attitude. He is only 23 years old! He says “I’m feeling really good right now, I took three weeks off after Dakar to relax and spend time with friends and family but it was soon time to start riding again. The recent test in Morocco went really well, it was useful for me to get back up to speed on the bike and improve my feeling in the desert. I hope my performance in Abu Dhabi will be like my second week at the Dakar – I want to get closer to the top guys and believe I have the experience and confidence to do this now. My goal for the season is to be near the top of both the junior world championship and the overall.”

Toby Price and Mathias Walker, two of KTM's top riders, are recovering from injuries after Dakar and cannot participate in the upcoming race.

The Abu Dhabi Desert Challenge begins this coming Saturday, March 30, 2019, and runs through the desert for five days, concluding on the fourth of April. Keep an eye on all the competitors on the event’s website!