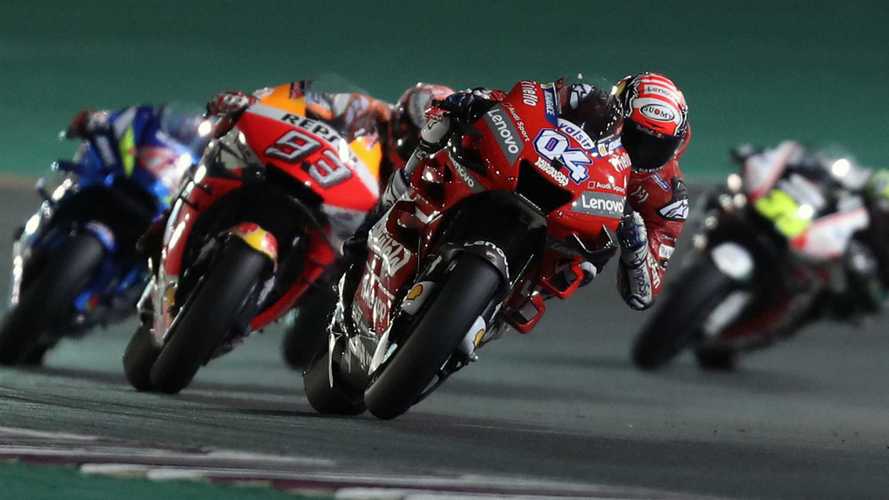 What the heck is going on with the Qatar Grand Prix? After Andrea Dovizioso's win aboard a Mission Winnow Ducati, a flurry of complaints were lodged against the team for possible cheating with an alleged illegal spoiler. The whole situation has devolved into a lot of finger pointing and rules lawyering, casting a shadow over Dovizioso's victory. So, did Ducati cheat to win the 2019 MotoGP season opener in Doha, or is it a lot of whining and complaining from the losers? Let's take a layman's look at this situation.

Watch A Former MotoGP Rider Give The Suzuki Katana A Workout

According to Cycle World, Aprilia, Honda, Suzuki, and KTM banded together to lodge a formal complaint against Qatar Grand Prix winner Mission Winnow Ducati. The complaint states that Ducati fitted a tiny winglet to its bikes' swingarms, giving the big Ducs an illegal aerodynamic edge over their competitors. Ducati claims that the winglet was simply a totally legal deflector meant to keep rain, dirt, and debris away from the rear tire and to direct air to it to keep it cool.

Now, the book listing all the technical regulations governing MotoGP is as thick as a very thick thing so I'm not going deep into the technobabble here. Apparently MotoGP's governing body, the Fédération Internationale de Motocyclisme (FIM), sent a technical regulations amendment to all participating teams on March 2. Item 7 in that amendment stated that teams could mount a deflector to keep water off the rear tire as long as it was permanently affixed to the swingarm, couldn't move autonomously, and provided no aerodynamic effect.

That's pretty clear, right? That's the sticking point here. Ducati says that the deflector mounted to its bikes was totally legal and in line with item 7 from the regulations amendment. Aprilia, Honda, Suzuki, and KTM say it's not legal and therefore, since Ducati used the deflector in the race, the Bologna Bombers are a bunch of filthy cheaters. Conspicuously absent from this complaint is Yamaha. Yamaha didn't join in on the complaint because, during the last Valencia GP weekend, Team Blue used the swingarm deflectors due to heavy rain during that race.

On its surface, this story reads like sour grapes from the four teams lodging the complaint. Ducati won, they lost, so they're complaining and mucking up the water because Dovizioso went out and ate everyone's lunch. You dig a little deeper, though, and things get weird. Apparently, everyone at the track knew that a complaint would be triggered if Ducati rolled out with the swingarm deflector. Ducati hit the track with deflector intact and, sure as heck, the complaint came.

Wait, what? So, the four teams that complained pre-complained then issued the formal complaint and everyone knew it was going to happen? That's weird. This seems like a whole lot of FIFA-level futbol drama to me. Did Ducati cheat? I seriously doubt it. Time will tell, I guess. If and when we find out anything more we'll be sure to let you know.