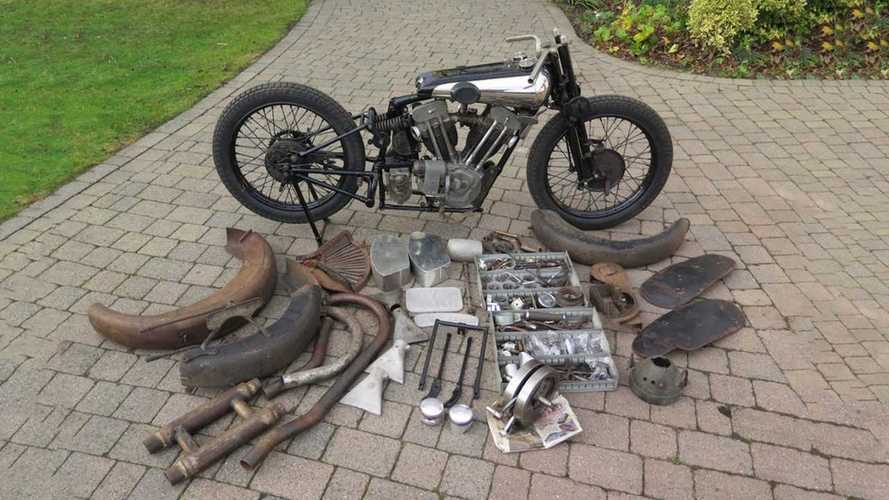 It's worth more than five hundred thousand dollars to someone, apparently.

Even folks who are not motorcycle people know the name Brough Superior. Lawrence of Arabia, they will say, didn’t he ride one?

The marque’s fame and history definitely didn’t hurt the sale price on this bike, even though it is a “basket case,” a bike that’s in pieces (in baskets). This particular motorcycle and all of its parts had been inspected and declared complete, with matching numbers on the engine, frame and gearbox. This particular bike though, has provenance beyond the completeness and the famous name. It was owned and ridden by one F.P. “Gentleman” Dickson.

These custom-built bikes were known in their day as the “Rolls-Royce of motorcycles.” Dickson raced in the International Six Days Trials (ISDT) (now called the International Six Day Enduro) and won two gold medals on a Brough Superior (it is unclear if he won those medals on this particular machine). He and George rode in the same teams along with their friend Eddy Meyer.

According to the auction site, when the bike was brand new, Dickson rode this bike in the 1930 International Six Days Trial along with George Brough and Eddy Meyer.

Sources are a bit fuzzy on these dates; there is some disagreement. Dickson ended up crashing in one of these six-day trials, though, perhaps on this very machine. He broke his leg and was taken to a hospital. His teammates George and Eddy went to join him, but George was hit by a wrong-way driver on his way there and also suffered a broken leg.

“Gentleman” picked up a case of pneumonia in the hospital and died in 1931. George Brough survived his broken leg but had a limp for the rest of his life. Medicine in the 30s, folks.

The bike has its original log book and a file on its history, showing the original owner was none other than George Brough. The last time it sold was in 1974, and has been with that owner this whole time–44 years!–until his recent death.

If the parts alone cost over $560,000, what will the restoration cost? The new owner probably does not care!