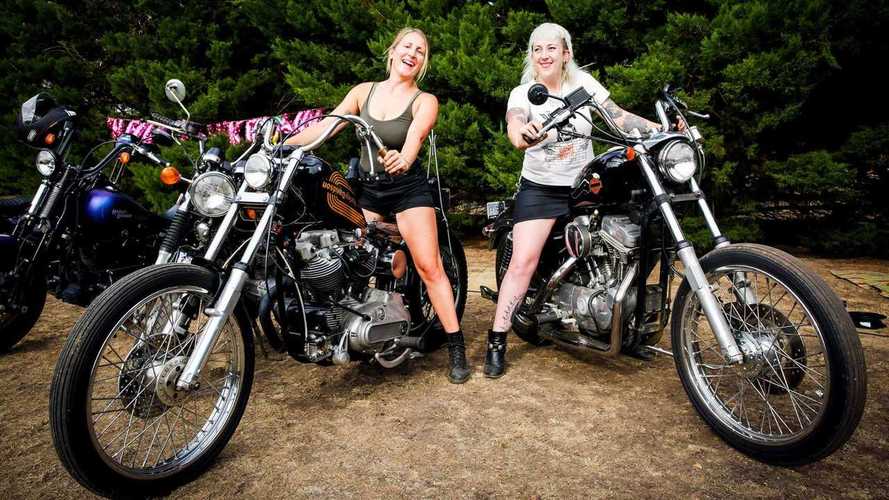 Dames from Down Under drive, drink, and dance. In that order.

In a land where popping out for a quick ride is called a “squirt”, nothing is surprising. The Aussies have a reputation for pulling out all the stops and this party is absolutely no exception. The Sheila Shakedown is a women-only moto camping weekend where breast bling, sausages-on-a-stick, and mechanical bull riding are part of the more mellow activities.

Organizers Remmi, Riley, and Jaz have made sure the femme fest attracts all the riders. “No nose pickin' at what type of bike,” states the site. “From Harleys, to Cafe Racers, Dirt Bikes, Choppers, Sports Bikes, ya dad's Scooter, or even ya mum's Hotrod! It's one big Scram Jam.”

The Sheilas Shakedown 2019 was the third incarnation of the raucous rider rally. Like so many of these types of camp outs, the original group was small; 30 like-minded women got together in the lush forests just north of Melbourne. They had such a blast that six months later they did it again, just south of the city. This year, at the now-annual event in Phoenix Park the babes count was already up to 250.

Over the course of the weekend hey play games, combine silly and skill, and generally let it all (seriously, ALL) hang out among new found friends, steady mates, and even family.

Around the world, women who ride are finding one another to share in their reasons for rippin’ and also to have a damn good time. In the US, organizations like The Litas, The Throttle Dolls and the Missfires, women-only camp outs like Babes Ride Out and Dream Roll and female entrepreneurs such as the women of ATWYLD, Stellar Moto Brand and Breaking Hearts and Burning Rubber have been helping unite ladies who ride and spread the word.

Riding motorcycles is rapidly becoming a sport that welcomes women of all ages, experiences, and cultures, inviting them to experience the freedom of the open road and the confidence that comes from being at the controls.