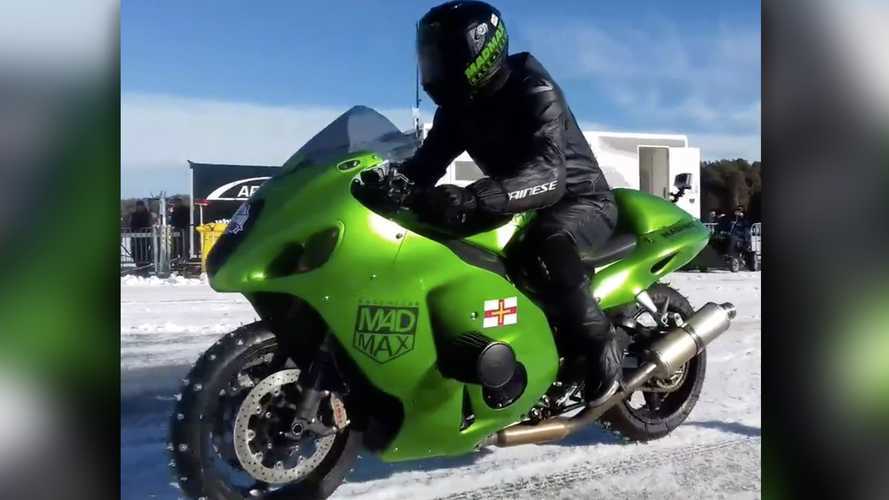 So close yet so far.

Last week, we introduced you to Zef Eisenberg—at least those of you who had never heard of the speed devil. His newest goal was to reach 200 mph on ice, straddling his specially-prepared snow-Busa in order to set a new speed record. The record fell through, but Eisenberg brought us along for the ride and the video is pure madness.

Tunnel vision much? This is what going at 176 miles an hour looks like. Already on a dry, clean, even asphalt surface, this is the kind of speed that’s highly unforgiving and nerve wracking. Now imagine doing the same but on the rough, rugged surface of an iced-over lake. Yikes.

That’s what Zef Eisenberg managed to pull off over the weekend during the Arsunda Speed Weekend in Sweden. While it may seem plenty fast to us common folks, it wasn’t nearly fast enough for Eisenberg. He was 24 mph short from his initial target. His goal over the weekend was to break, no, explode the 187.5-mph speed record on ice by reaching 200 mph.

With Team MADMAX backing him up, Eisenberg gave his special Hayabusa fitted with gnarly-looking spiked tires a few runs on the ice, inching closer to his goal with every outing. The odds weren’t ever in his favor, however, as not one but four tire-related incidents plagued his weekend and forced him to forfeit his record attempt. His own Busa busted a tire three times during the 1st, 2nd, and the 4th run during which the explosion of the tire also damaged the radiator. The fourth incident happened on a borrowed ice racer; the rear tire exploded and bombarded him with bits and pieces of rubber and metal in the back. He was thankfully uninjured thanks to his sturdy protective gear.

While this year is a write off, Eisenberg has every intention of attempting to break the record next year. In the meantime, while it’s not 200 mph, we get to enjoy his first-person, 360-degree, adrenaline-packed recording of his 176-mph run.