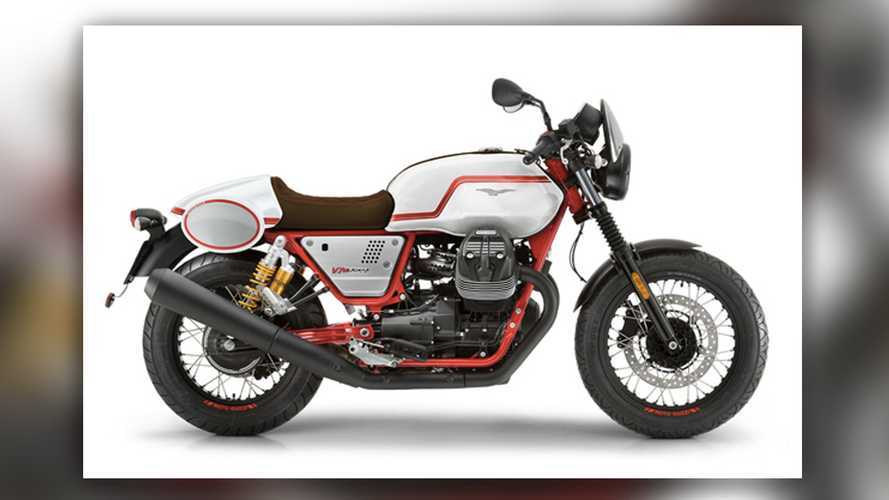 And then they were 8.

How many different versions of the V7 III can you count? We’re currently at seven—and they’re not different bikes, just different looks. It might be a bit overkill but this is meant to showcase the brand’s ability to customize its designs and also that you’ve got seven chances of getting your hands on a stock bike closer to what you want, look wise. This year, we’re getting yet another iteration of the V7 III. And then they were eight.

Moto Guzzi has announced that coming this year will be the 2020 V7 III Racer limited edition. I hear you loud and clear: there already is a V7 Racer in Moto Guzzi’s US lineup. Aside from its distinct livery, the “limited edition” and “available only in the US and in Canada” are the two elements of this sales pitch that make this Racer stand out from the V7 crowd.

The V7 Racer Limited Edition receives a proper racing livery with red stripes on the white tank reminiscent of the Rosso Corsa-painted frame and swingarm—a look inspired by Moto Guzzi’s 1971 V7 “red frame”. A leather strap, matching the diamond-stitched brown leather saddle, highlights the spine of the tank. Speaking of the saddle, Moto Guzzi explains that while it might look like a single-rider seat, “this new version is approved for two-up riding”—it is offered standard with passenger footpegs after all. Don’t judge a book by its cover.

The elegant spoke wheels are rimmed with a black channel sporting a red contrasting Moto Guzzi logo. This Racer is equipped with a set of Öhlins adjustable rear shocks meant to give the model a sportier on-road behavior. Other features include a lightened steering stem as well as a steering yoke guard.

Not even as a special, limited edition is the V7 popping the $10k seal—this version of the model will land in the dealers in June this year and pricing has been set at $9,990. As for the number of units available, Moto Guzzi hasn’t confirmed a number, so there will likely be enough to go around.

ONE OF THE MOST CELEBRATED MODELS IN MOTO GUZZI’S HISTORY, WILL ARRIVE AS A FACTORY DIRECT CUSTOM, PAYING HOMAGE TO THE MOTORCYCLE’S ORIGIN

Moto Guzzi has maintained a reputation as one of the world’s most prominent manufacturers of motorcycles. Almost a century of tradition, passion, and significant commercial and sporting success; almost a century of magnificent motorcycles all built in Mandello del Lario, combining the best technologies with first-rate Italian manufacturing techniques: Moto Guzzi values since 1921. With no fewer than 3,300 racing wins, including 14 World GP titles, 22 world records, and 11 Isle of Man Tourist Trophy wins in the course of its long history, Moto Guzzi has an established tradition of technical solutions that when paired with its signature bold styling, make the Moto Guzzi heritage nothing short of legendary.

New for 2019, as a 2020 model year, Piaggio Group Americas is glad to announce the arrival of the new V7 III Racer Limited-Edition dedicated to USA and Canada only. The new Moto Guzzi V7 III Racer is not only the most sport-oriented of the range, but also the one with the most prestigious. This limited-edition model further demonstrates Moto Guzzi’s ability to continuously create true customs directly from the factory.

Not only limited in concept, technical and aesthetic differences distinguish it from previous versions as well as other V7 III models. The V7 III Racer Limited-Edition introduces a new gloss-coated white graphic with red accents. This feature is reminiscent of the “Rosso Corsa” color chosen to paint the frame and the swingarm: an explicit reminder of the first 1971 V7 Sport series, nicknamed “telaio rosso”, which translates and is referred to affectionately as “red frame”.

The V7 III Racer Limited-Edition’s sport-derived nature is emphasized by its clip-on bars and its classic humped seat. In accordance with tradition, the Racer has a single-seat sport bike look, but in reality, this new version is approved for two-up riding. Arriving stock with passenger foot pegs and, as before, the seat cover can be easily removed when necessary, to accommodate another rider. The spoked wheels have black channels and red Moto Guzzi stickers like the other sport models from the brand. Other premium components that stand out are the set-back foot pegs, which are machined from solid billets, the lightened steering stem and the steering yoke guard.

The most important technical innovation is the V7 III Racer Limited Edition’s Öhlins shock absorbers, adjustable in spring preload and in rebound and compression. With the top name in suspension, the Öhlins shocks ensure top performance under more aggressive riding and challenging roads.