McQueen's Triumph From The Great Escape To Make Rare Appearance 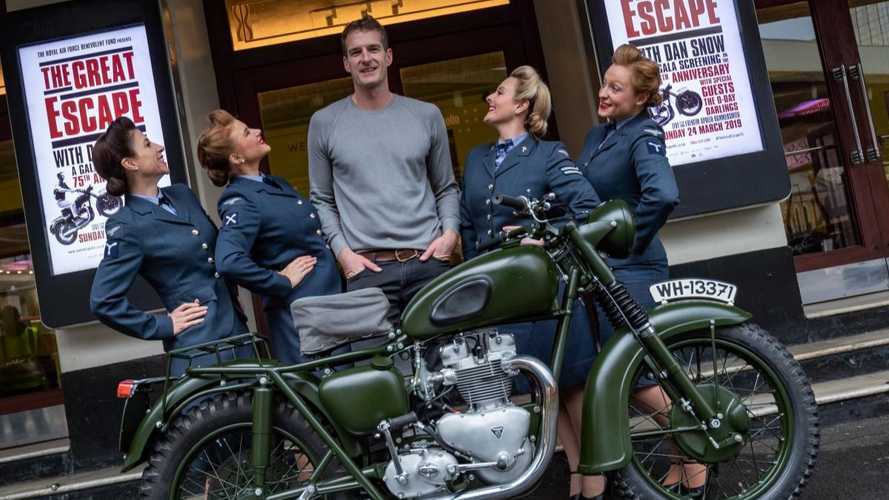 Find this movie and watch it. The thrills! The chases! The motorcycle jump!

If you ride motorcycles and have never seen “The Great Escape,” you should rectify that oversight as soon as you can. The movie is set in a German POW camp during the second World War and based on a true story. The impossibly cool Steve McQueen plays Hilts, who famously jumps a motorcycle over a barbed-wire fence in an attempt to escape his German captors.

This year is the 75th anniversary of the movie and a celebratory event and screening is happening in London on March 24th. One of the three bikes built for the movie will be on site outside the theater in all its restored glory. The hosts for the evening will be Dan Snow who is known as BBC’s “History Guy,” and historian Paul Beaver who will give a presentation on the true story the movie breakout is based upon.

The commemorative evening will also include a singing group, the D-Day Darlings, performing hit wartime songs. Dick Shepherd, who owns and restored the “Great Escape” bike in attendance, will be on hand for questions and discussions–this is the guy I would very much like to talk to there. Apparently after filming wrapped up in 1963, this particular bike returned to its builder, Ken Heanes, who used it as a workshop hack. He then sold it to a local farmer who used it to round up cattle. When the bike didn’t suit his needs anymore he parked it in a barn (why is it always a barn?) and left it until Dick Shepherd discovered it there 15 years ago. It was not in good shape. The Triumph 650 TR6 has been fully restored (and the only non-original part is the front wheel which could not be salvaged) and is beautiful now.

If you’re going to be in London at the end of March it will be worth it to buy a ticket to this event and listen to the history behind this motorcycle and the movie it starred in.