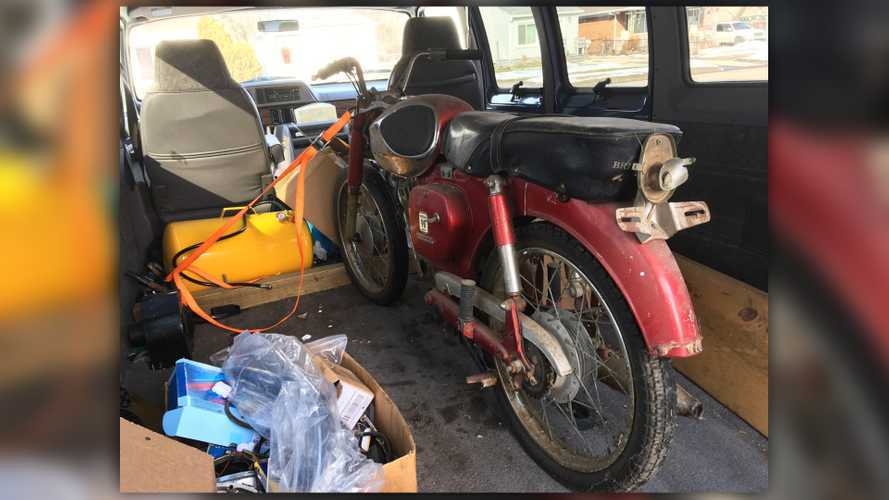 Nothing worse than abandoning a project, even when it's hopeless.

Every motorcycle project starts with two things: a bike (for various metrics of "bike", amirite?) and a dream. Sometimes that dream is the full, frame-up restoration of a classic or a quest to rescue something weird and obscure. Sometimes it's a wild custom or cafe conversion. Whatever it is, the dream is every bit as important to a bike project as the parts and the know-how. Sometimes, sadly, somewhere along the way the dream dies and all you're left with is a pile of parts and a growing sense of loss (or shame, depending). That happened to me this week when, after twenty years, I gave up on ever restoring my 1966 Bridgestone Sport 90.

The Bridgestone was the second bike I ever owned. I got it not long after I started riding from a dude in a small engine tech class I was taking at the local community college. He just gave it to me, said he didn't want it anymore. He'd gotten it from a couple of kids who had heavily abused it and abandoned it after crashing it into a barn. I picked it up from him, title and all, and hauled it back to my Ann Arbor apartment where my soon-to-be wife made the fateful proclamation that I could have as many free motorcycles as I wanted. That statement would bite her in the ass numerous times over the years, but that's a different story.

This one isn't my former Bridgestone, but it could have been.

Anyway, I got the poor little thing home and it was a mess. No fuel tap, a busted headlight ear held on with electrical tape, two bent wheels (one missing some spokes), a mangled taillight assembly with no lens, pitted chrome, scratched paint, and even the tires it came from Japan with way back in 1966. I didn't care, though. I was going to restore it to its former glory. I, a young man who had just learned how to change a bike's oil and had never turned a wrench in anger, was going to restore a super obscure, 30-some-year-old, Japanese two-stroke in the early days of the internet. Clearly, I was much more idealistic back then.

After a few false starts—and the construction of an amazingly hacky DIY fuel tap built out of copper plumbing parts—I actually got it running. I even rode it around my neighborhood a bit! Then, like a lot of projects, it stalled. I didn't have a lot of money, then I got married and moved to Detroit, then it was hard (or impossible) to find parts, other, more urgent projects knocked it down the list, and eventually it was shuffled to the back of the garage and reduced to a parts shelf and home for wayward spiders.

Wait, I should probably back up a bit here. Did you guys know that Bridgestone made motorcycles in the 60s and 70s? Yes, that Bridgestone! It wasn't as weird a thing as you might imagine, the company did start out as a bicycle factory, after all. Anyway, Bridgestone made these amazing, high-tech, two-stroke singles and twins basically in a corner of the tire factory. They ranged anywhere from 50cc to 350cc, were incredibly well built, and had a decidedly European design language—chromed tanks with knee pads, pressed bathtub-style frames, stuff like that. Some were street bikes, some were scramblers and off-roaders, and some were even racers.

Yeah, they raced them! There were good, too. Real good. Bridgestone dominated every class it entered with its bikes, much to the chagrin of the Big Four. Eventually, with advances in four-stroke engines and increasing environmental restrictions—plus, allegedly, a little pressure from the Big Four who, it's said, got together and told Bridgestone that if the company didn't stop making bikes and winning races that the Big Four wouldn't fit Bridgestone tires as OEM equipment anymore—Bridgestone shuttered motorcycle production in the mid-70s.

There's way more to the Bridgestone story, and lots of conflicting information about it out there. I'll do a deep dive into Bridgestone motorcycles soon but that's not what we're talking about here. Let's get back to the story.

So, the little S90 sat unloved in my garage for years. At one point I took the engine out and set it on my bench with the idea that I'd rebuild it and never got around to it. I'd look at it now and then, sigh, and tell myself, "Someday". After twenty years, though, that someday never came. Then, all of a sudden, last week I brought home my dream bike and all my motorcycle priorities changed.

You remember me telling you about that basket case BSA, right? With that in the garage it rocketed right to the top of my projects list and, once again, the poor little Bridgestone got sent to the back of the line. Just a few days ago I decided that the Bridgestone had to go. I'd been waffling on ditching the S90 for a while, but with the Beezer in the garage it was finally time. I was going to just scrap it until our man Todd asked if he could have it.

So, this week, I rehomed the Bridgestone. Like, I know I was never going to get to it and it deserves better and it went to a new home, but man, I miss it already. Also, it feels weird not being a Bridgestone owner. I've always considered myself a Bridgestone owner, and now I don't have one. I'm kind of at a loss. To be fair, I have the Beezer to deal with and Todd's already knocking the S90 back together. Hell, I'll probably get to ride it later this summer. I know projects fail and dreams die, but it always stings a little when it does. Now to make sure the BSA dream stays alive, eh?