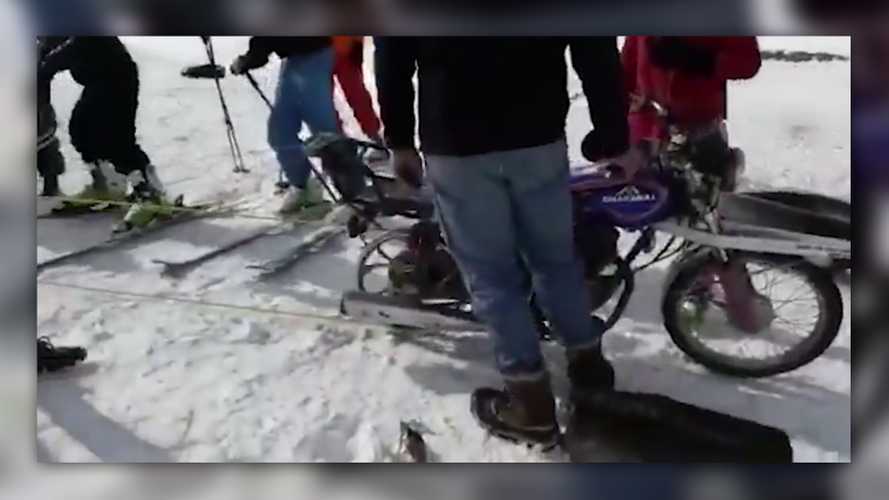 That's one way to do it!

Despite what you may have heard, Afghanistan is actually a lovely country with quite a bit going for it. Well, in some places at any rate. Take Bamyan, for example. Located about 150 miles northwest of Kabul, Bamyan is a mountain town of around 100,000 souls situated at 8,370 feet in a valley between the Hindu Kush and Koh-i-Baba mountain ranges. The area has been settled since at least 2,800 BCE, was once a stop on the ancient silk road, and is profoundly rural.

FUN IN THE SNOW

Honda EZ-Snow: For When Bike Is Life But It's Snowy Outside

Five Cool Conversion Kits For Dashing Through The Snow

Downtown Bamyan is just a bazaar and a few buildings, there's precious little infrastructure, and winter lasts for at least six months. While the area doesn't have much in the way of western-style modern amenities, it does have a small but passionate skiing scene which just opened the country's first ski lift. A motorcycle-powered ski lift!

According to the Daily Mail, the lift was installed by some Americans who live in Banyan to give local skiers an easier, faster way back up the mountain after a run. At the bottom of the hill, a small bike sits propped in a jig secured to a parked SUV with what looks like a stout tow strap. A long rope is looped around the bike's tireless rear wheel and stretches up the mountain to an upturned wheelbarrow anchored to the ground. The rope threads over the wheelbarrow's wheel and back down the hill. To use it, a skier simply grabs on to the rope, the lift operator cracks open the bike's throttle, and up the skier goes. It's bonkers. It's also genius and the only thing I dislike about it is that I didn't come up with the idea.

I have no idea what kind of bike they're using here. I think it's an Indian bike, either a Mahindra or Bajaj, but I'm not entirely sure. Whatever it is it's small and looks like the perfect choice to run a DIY ski lift in the Central Afghanistan mountains. I mean, what else would you use?