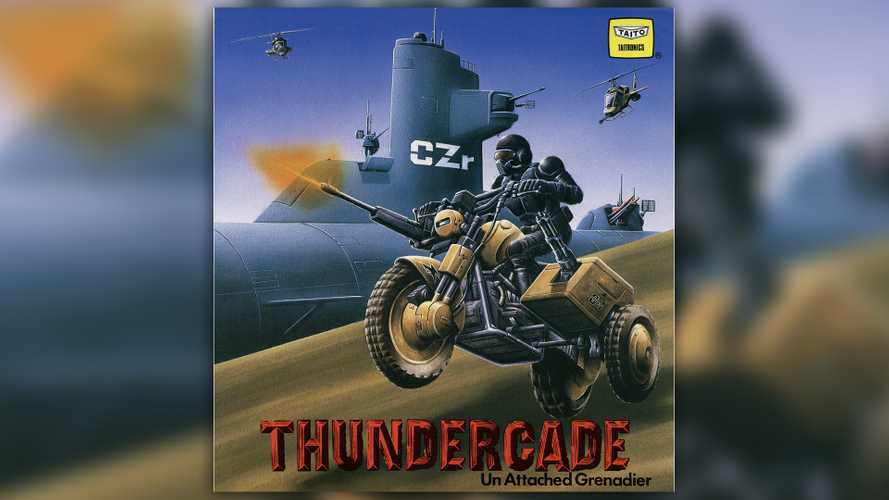 In the twilight of the arcade's golden age—an era that stretched roughly from the release of Space Invaders in 1978 to 1987 with the launch of Double Dragon—top-down, vertical-scrolling shoot-'em-ups were all the rage. Even if you don't know what a "vertical-scrolling shoot-'em-up" is, if you've ever dropped a quarter into, say, a 1942, Raiden, or Ikari Warriors machine you know what I'm talking about. The majority of these games were vehicle-based where players piloted tanks, spaceships, or P-38s and fought endless waves of frenetic, bullet-spewing enemies. One of the few where you actually get to do all this rad stuff while riding a motorcycle is today's subject of discussion, a little game called Thundercade.

Also called Twin Formation and Tokushu Butai U.A.G (Special Forces Unattached Grenadier) in Japan, the game was released by arcade powerhouse Taito in 1987. Like most arcade games, there's little in the way of story or plot to get in the way of the fun. One or two high-speed, low-drag, motorcycle-mounted operators are inserted behind enemy lines via a low-altitude air drop from a C-130 to "Destroy enemies and the atomic power plant". Simple.

Gameplay is pretty straightforward and instantly recognizable to anyone who's spent even a few minutes down at the local arcade. Ride forward, blast everything that moves, collect powerups—in Thundercade's case a selection of ever more powerful weapons mounted in sidecars—don't get killed, save the day. There are a limited number of super weapon-style powerups that wipe out everything on the screen by calling in what looks like an AC-130 for some close air support, but for the most part, you rely on your bike-mounted weapons and your reflexes.

Along the way you fight tanks, choppers, various colorfully-uniformed soldiers, sand monsters, at least one submarine, and various other mooks on your way to the enemy atomic power plant. There's no hard cut between the levels, so it just flows from one to another with nary a pause in the action. Once you get through all the levels and destroy the main target—the atomic power plant—the C-130 picks you back up and you're declared "Just a superior soldier!" Job well done, I'd say.

Overall, Thundercade is a solid C+/B- game. It doesn't really break any ground in its segment, but it's nice to look at, very playable, and hell, who doesn't love riding up-gunned motorcycles and saving the world? If you're curious to try it, you can play Thundercade in your browser here. If you don't have that kind of time you can check out some gameplay on YouTube here and here.