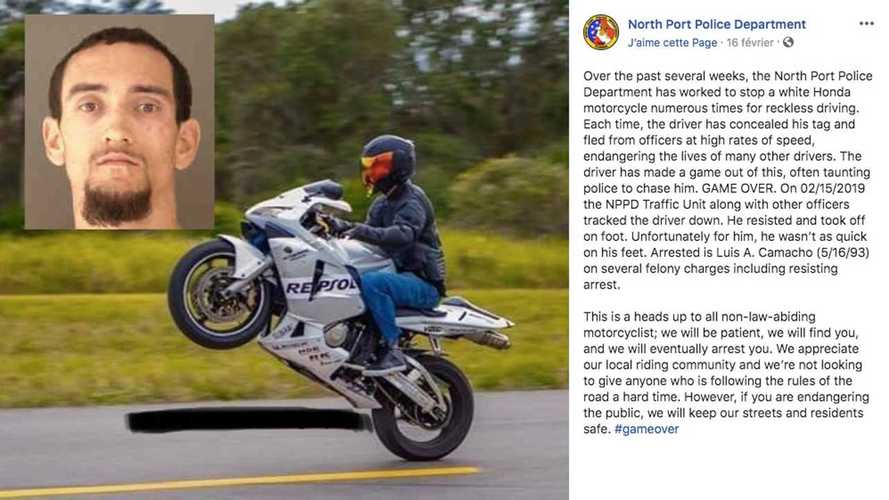 "What are you going to do? Arrest me?" said the man in the shackles.

As the saying goes, karma can be a monumental beet and there’s nothing more satisfying than a deserving citizen being served a healthy dose of it. How many times have you wished for a divine intervention after having to deal with a clueless or obnoxious driver—and by divine, I really mean of the law enforcement type? In my case, I stopped counting after 10. While most of the time, we rarely get satisfaction, every so often, a miracle happens and the cherries light up at the right time. And that’s only for someone who messed up once and angered us in the process—imagine the level of satisfaction achieved when someone openly taunting the authorities finally gets his serving.

FLORIDA IN ALL ITS GLORY

Florida Man Luis Camacho is an amateur stuntman who’d rather show off his talents for the world on the public roads to see than to do things the legal way. He can apparently pull a good wheelie and doesn’t seem to mind too much flexing his stunting muscles in front of any possible audience—even the police.

The North Port Police Department in Florida had in fact raised the flag on Camacho’s shenanigans. Armed with his Honda CBR1000 RR, he would pull a few stunts and once things started heating up, all he had to do is hide his license plate and make a run for it—the officers couldn’t keep up, or identify him. Until now.

Camacho completed a few successful performances over the course of the past few weeks, but if you keep poking the sleeping bear, it will eventually claw your face out. On February 15, the North Port police tracked him down and while he tried escaping by foot, he definitely wasn’t as fast as his CBR. After weeks of taunting, he was finally arrested and is facing a number of charges, including resisting arrest. Justice is a dish best served cold.