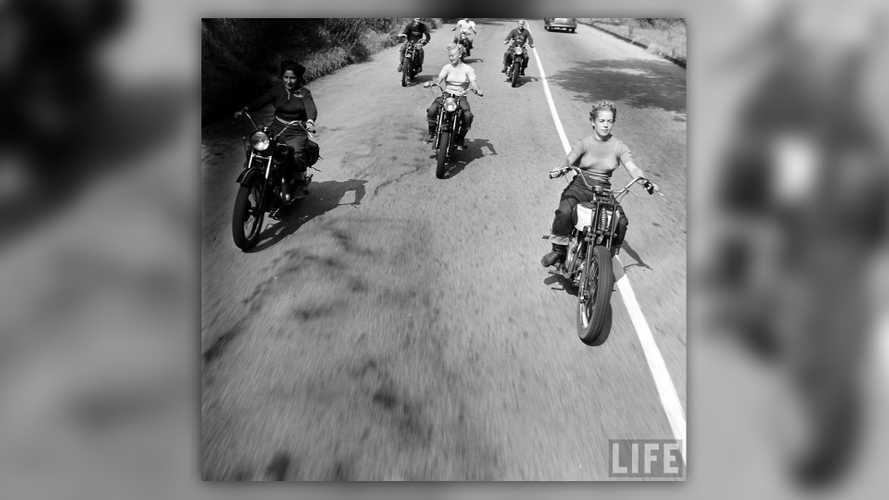 You all ever heard of Loomis Dean? No? Even if you haven't heard his name I bet you've seen his work. Dean was a photographer—some would argue the photographer—for Life Magazine from 1947 until the magazine ceased weekly publication in 1972. He got his start in photography in 1938 as a shooter for the Ringling Brothers and Barnum & Bailey Circus, served as an Army Air Force photographer in the Pacific during WWII, and spent the first few years after the war as a press agent and shooter for the circus again. What I'm saying here is that Dean knew his way around a camera.

Dean started with Life in 1947 and made a name for himself getting some of the finest, most natural most candid shots of both celebrities and Joe and Jane American you've ever seen. So, why am I giving you a history lesson on a magazine photographer in this here motorcycle magazine? Well, while digging around for stories this morning I came across a set of photos he did in 1949 featuring woman riders and their bikes and, man, these pictures rule.

There's precious little info on these shots out there on the internet. Their publication date is "1949" which, you know, nails it down to only about 50 issues they could be in. I really wanted to find the context in which they were published, but alas, 70 years is a long-ass time and the internet doesn't know everything. I did find out some things, though, especially about specific riders featured, so let's have a look.

This one really sets the tone—a mixed group of men and women out for a tear in Los Angeles' Griffith Park. From left to right (as far as my quick research turned up) is Lucille Meeker on her Triumph, Betty Drafton on a Velocette of all things, and Cecelia Adams on a hand-built Frankenbike consisting of an Indian Scout engine in a Royal Enfield frame she called the Royal Indianfield. How cool is that?

Here's a better shot of Adams, and probably my favorite of the bunch. There's a better shot of her in this collection, but I prefer this one for the angle and inherent badass-ness of it. Apparently, Adams was a serious business trials rider/off-road racer back in the day. Here's an article about her taking first place in an "All-Girl" (ugh) trials race. The bike still lives, too! Here's a video of (supposedly) Adams' old Royal Indianfield starting back in 2017 and, man, it sounds awesome.

This article was basically an excuse to share these awesome pictures with you all. Just a little mid-morning awesomeness for you on a Monday. Sorry the details are as slim as they are. If anyone has any idea where I can find the original article these were published in let me know. I'd love to read it and expand on the pictures with a little more info. Until then, just bask in the super rad mid-century motorcycle goodness and fashion (those aviators, tho.)