Living In An Apartment With A Motorcycle 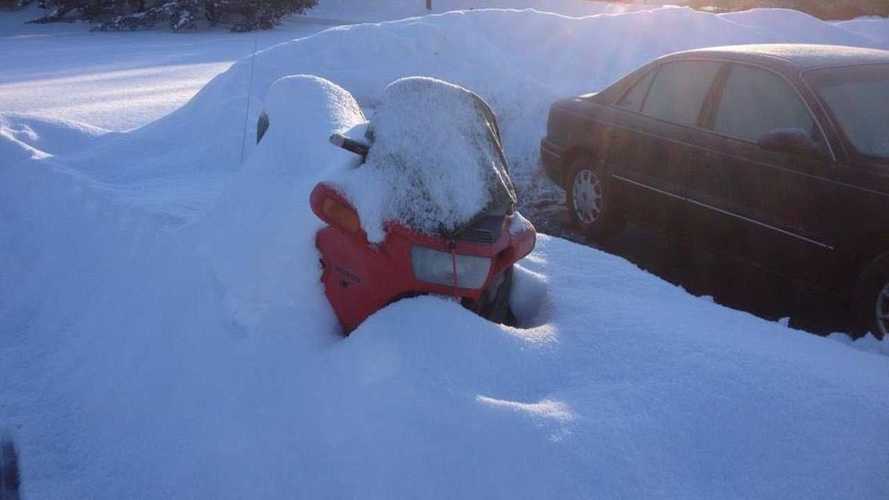 There are more problems than not having a garage.

Not everyone enjoys the luxury of a large garage in which to keep and work on multiple bikes. If you live in an apartment, chances are your bike doesn't get any shelter from the elements at all. Some complexes even make it difficult for you to own a motorcycle at all. Here are some ways to get around the restrictions property owners may place on those of us who don't own our own home.

A PLACE FOR YOUR STUFF

Parking is one major issue you may run into. In one community I lived in, one of my riding neighbors with a carport graciously invited my bike to share space under a roof next to his. Most of us aren't that lucky and have to park outside. You may need to think about adding one or more theft prevention devices to your bike, particularly on a smaller bike like a Grom, if you live in an area where that's a concern. Also invest in a good quality motorcycle cover to keep your bike protected from the elements, bird droppings, and such. This also helps disguise what's underneath, so people don't know whether it's a fancy sportbike or a beat-up old UJM. Don't cover it as soon as you get home from a ride, though, or you may melt the cover to your engine or exhaust. Good luck remembering to come back and cover it later when it's cooled off.

Some landlords, particularly private individuals rather than inhuman property management companies, may have no problem with you stashing a bike out of the way somewhere, even if they only permit you one parking space (presumably to be occupied by your car). It's also possible to park a motorcycle and a car in a single space, which is how I've gotten around this problem before. Maneuvering in and out can be inconvenient, but it's certainly better than no bike at all.

Winter storage presents another problem in the snow belt. Some motorcycle shops offer to store your bike all winter. There's a fee, of course, but at least you know it's safe inside their shop, and sometimes it includes a free pre-season checkup or oil change. Perhaps you can convince a friend with a garage to let you keep it at their place for a few months, as I did one winter. (Thanks, Brian.)

If you can't arrange that, you may have to leave it outside for the winter. Again, cover it, and keep snow from building up on the cover the best you can. They're not designed to handle weight on top. Keep an eye on your cover all winter, as high wind and heavy snow could ruin it. That's what happened to my PC800 pictured above, and my wife and I had to improvise something with bungees and tarps.

Motorcycle maintenance is another potential issue. Some places don't allow you to wrench on your own vehicle. Maybe it throws off their sense of aesthetics or something. Hopefully, you can get away with something as simple as lubing your chain. You might have a buddy who can let you change your oil at their place or perhaps larger jobs. It's entirely possible you may be forced to take your bike to a shop for repairs and maintenance, even though you're capable of doing the work yourself.

So far, all of these problems are problems you can work around. Sometimes, however, you may have trouble even being allowed to have a motorcycle where you live. Recently I talked to an apartment complex that doesn't allow double parking a car and bike in a single space as I described. They do have on-site self-storage, and they allow bikes to be stored in there, but that's an extra expense beyond rent. Particularly snooty communities may not like the image that comes with a chromed-out cruiser in the lot, and prevent you from parking it there. The best advice for that situation is to find somewhere else to park it, or preferably just don't live there. You don't need the hassle of living in a place that doesn't allow you to be who you truly are.

Owning a motorcycle can be tough when you don't own the property you live on. Some property owners can be extremely accommodating, while others may go out of their way to work against you. Like it or not, it's their property, so it's their rules. Hopefully, you can find a more lenient landlord or even one who also rides. If not, though, there are usually ways around the issues that can come up.